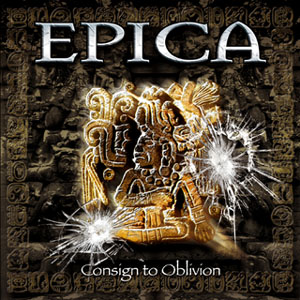 EPICA, the Dutch group formed by ex-AFTER FOREVER guitarist Mark Jansen, ex-CASSIOPEIA guitarist Ad Sluijter and keyboardist Coen Janssen, will release their new album, "Consign to Oblivion", on April 21 via Transmission Records. The track listing for the CD is as follows:

View the album cover at this location.

Transmission Records are organizing a pre-listening session on March 7 in a studio for members of the press, and want to give fans a chance to join in by setting up a contest. For your chance to attend the session, simply answer the following questions:

1. Which songs of the new album already have been performed earlier during the last couple of shows?
2. What culture is featured in the "a new age dawns" concept?
3. Which male singer is featured in "Trois Vierges" as a guest vocalist?

Send your answers to [email protected] (with "competition" in the subject box). The contest will close on Thursday, March 3 at 3 p.m. CET. Out of all correct submissions, 24 winners will be randomly chosen and will be getting notification by e-mail. The location will be Polyhymnia studios in Baarn, Holland and time of entry will be 6 p.m. CET (directions to the studio will be sent to the winners by e-mail).