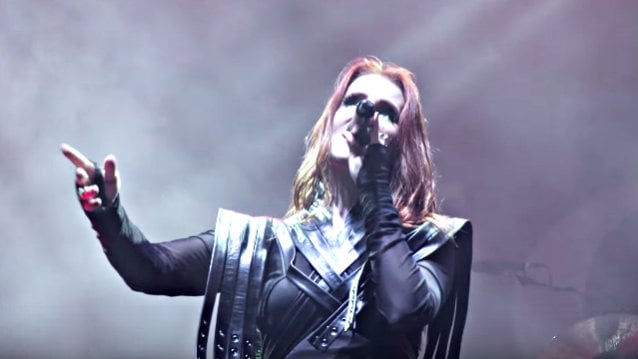 Dutch symphonic metallers EPICA have released a performance video for "Dancing In A Hurricane". The track is featured on the band's latest album, "The Holographic Principle", which was released via Nuclear Blast in September 2016 and charted worldwide.

The "Dancing In A Hurricane" clip was captured during EPICA's sold-out show in February at the Zenith in Paris, where the band closed its most successful European tour to date together with an excited legion of 5,000 fans. This live video perfectly mirrors the band's craving for non-stop innovation and for continuously improving their live performance.

EPICA keyboardist Coen Janssen comments on the video: "When you are in the midst of touring, you tend to forget how special it is and how privileged we are to be able to perform every night. The show in Zenith Paris is an absolute highlight in our career and therefore I am extra happy we decided to shoot some live videos of this show. This first one, featuring one of my favourite songs on 'The Holographic Principle', takes me back to this night instantly so I can relive the moment again and again. The video shows me in retrospect what an awesome tour this was!! Thank you all again for joining us that night and for making our days brighter all the time!!"

This video was captured and edited by the video production team Panda Productions.

EPICA will return to North America this August and September for "The Ultimate Principle Tour" with LACUNA COIL, INSOMNIUM and ELANTRIS.

Asked how the heavier-sounding tracks on "The Holographic Principle" have been going over live on the band's current tour, EPICA singer Simone Simons told A Music Blog, Yea!: "Amazing. There are some songs, like 'Beyond The Matrix' and 'Ascension', that just are really made to be live songs. And that's also a little bit how we kind of went about when we were writing the songs and finalizing them together with our producer, Joost [Van Den Broek], that we wanted these songs to become live songs. But then when we're on the stages, songs like 'Ascension' and 'Beyond The Matrix' [and] 'Divide And Conquer' are amazing live songs. The fans also really welcome those and go crazy. Yesterday, we had so many brutal-looking metalheads jumping up and down during 'Beyond The Matrix'. I'm, like, 'That's a pretty gay song, but okay.' [Laughs]"

Simons told Metal-Rules.com about the lyrical themes covered on "The Holographic Principle": "It isn't a concept CD as the story is not in a chronological order of events from beginning to the end. Some songs deviate from the idea. 'The Holographic Principle' is, basically, that we are living in a hologram. With the new technology and virtual reality glasses we realize reality is generated so perfectly that you can no longer tell the difference, so can reality also be a hologram?"