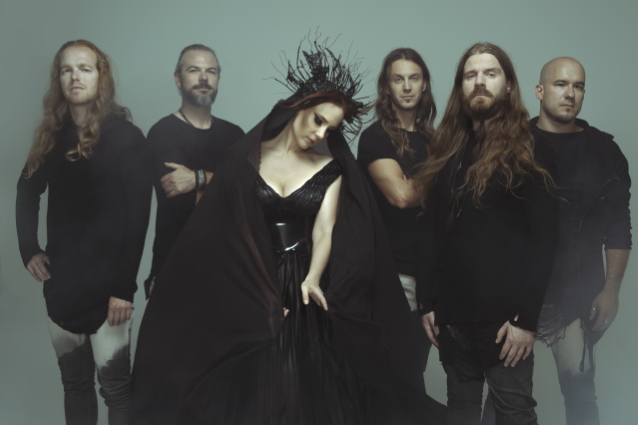 Dutch symphonic metallers EPICA have released the official music video for the song "Skeleton Key". The track is taken from the band's new album, "Omega", which is being released today (Friday, February 26) via Nuclear Blast. The follow-up to 2016's "The Holographic Principle" was once again produced by Joost Van Den Broek (POWERWOLF, AYREON) in part at Sandlane Recording Facilities in Rijen, Netherlands.

Singer Simone Simons comments: "Welcome to the 'Skeleton Key' multi-layered dreamworld. Don't forget to bring your Skeleton Key to unlock all the secrets within yourself! I hope this song will haunt you until we can see each other again."

"Our strength is that we have many great songwriters in one band. We have managed to combine each other's strongest qualities and select the best songs. It was a fruitful period of spending time together to work as one team on those tracks. I think this has made the biggest difference compared to our previous albums. Still using the advantages of comfortably sending files by the Internet to each other but combining that with coming physically together again to work on all the tracks."

In a recent interview with Australia's AMNplify, Simons stated about her inspirations and influences for "Omega": "Life in general. I mean, the years going up to 'Omega', I was struggling with a lot of burnout but also having a very hectic lifestyle. Combining touring life with family life was not always easy. So my battery, I would say that I was extremely exhausted from touring and also the emotional stress of being away from my son. That drained me big time. But I guess you go through phases in your life as well.

"Whatever is happening in society, we, as musicians, as artists, are a little bit of a mirror of what is happening, of course, within ourselves, people close to us and what's happening around in the world," she continued. "Global warming is a big topic in one of my lyrics. Genome editing. What's happening worldwide is a topic. But most of all, this album is a very spiritual album. It's the most profound, mature album in EPICA's history.

"The name 'Omega' is actually referring to the Omega Point, where you have the Big Bang, the creation of universe. Omega is the end, where basically everything comes together, spiritually and science. Everything in the universe is fated towards a final point of unification. It's the end of our 'Kingdom Of Heaven' series. So this is the third and final 'Kingdom Of Heaven' song. It's our eighth studio album. The number eight is also very spiritual because if you put it on the side, it's the infinity symbol. 'Kingdom Of Heaven' is about life after death, and it's also number eight on the album. So there is a lot of hidden symbolism on the album and in the artwork. The big life question, 'What is the true meaning of life?' How do we navigate through life within ourselves? We are all 'yin and yang.' We are all made out of light and dark. We all have this labyrinth within ourselves in which we have to navigate ourselves. We hopefully find our way out of the labyrinth and don't get lost within the labyrinth of ourselves."