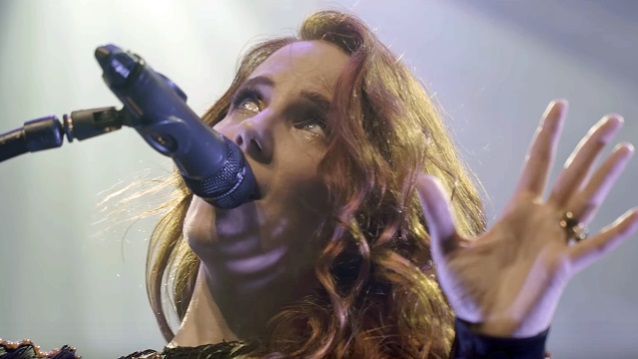 Dutch symphonic metallers EPICA have released a brand new music video for the song "Universal Love Squad". The clip was filmed at the band's recent sold-out 1000th-show-anniversary concert at 013 in Tilburg, Netherlands in front of 3,000 ecstatic fans.

"Universal Love Squad" shows a different and more intimate side to the band, as it is the acoustic version of another EPICA track, titled "Universal Death Squad", released in 2016 on the album "The Holographic Principle".

In celebration of its 1000th-show anniversary, EPICA performed this track for the very first time live, which resulted in in this astonishing music video.

EPICA's Mark Jansen, band founder and guitarist, comments: "At the 1000th show, we performed for the first time ever the acoustic version of 'Universal Death Squad', which became 'Universal Love Squad'.

"As many fans kept asking us to play something acoustic live, we couldn't resist any longer. We want to thank our fans from all over the world for all these fantastic shows and hopefully there will be a 1000 more to come!"

After two years of non-stop touring worldwide, EPICA will perform the last batch of festivals of its current touring cycle this summer.

EPICA's latest release was "The Solace System" EP, featuring six songs which were created during the sessions for "The Holographic Principle".

Asked in an interview with Metal Wani if there are any plans for EPICA to commence the songwriting process for the group's next full-length album, Mark said: "We're gonna keep touring till September and then we're gonna take a little time off. We have been touring for 16 years constantly — recording and touring — and now we feel like it's time to do a little break — not too long — a little break to recharge the batteries, and then during the break, we will probably already start composing for the next album. But that little break will give us some opportunities for the side projects — like, Simone [Simons, vocals] wants to do something, I have MAYAN, Rob [Van Der Loo, bass] has some side project, Ariën [Van Weesenbeek], the drummer, is also in MAYAN. So everybody will fill in that little break in a different way. But I'm already feeling like wanting to write new music. So it won't take long."