Finland's RadioCity conducted an interview with singer Simone Simons of Dutch symphonic metallers EPICA when the band played at Nosturi in Helsinki on May 30. You can now watch the chat below.

On whether she has to be extra careful these stage on stage because of her pregnancy (father-to-be is Simone's longtime boyfriend, keyboardist Oliver Palotai of KAMELOT and SONS OF SEASONS):

Simone: "Yeah, well, when the belly gets bigger, your gravity shifts forward, so I don't wear heels anymore in daily life, but during the show I do. But it's weird, because the headbanging doesn't work so well anymore, and, of course, I try to not tense my belly so much, so there's enough room still to swim in my belly. I still do some headbanging, but not the really heavy stuff anymore; I don't jump or do crazy stuff. But I still wanna have a good time and don't stand there like a stiff board."

On whether her unborn child has reacted to the music yet while she has performed on stage:

Simone: "I talked to my friend [and former THE GATHERING singer] Anneke [Van Giersbergen] about that, because she was pregnant on stage as well. And she told me that her son was really quiet during the heavy songs, and when she did the ballads, he would then start kicking and getting active. But until now, I didn't feel the movement during the shows yet — outside I did. Maybe tonight [at the Helsinki show I will], so…"

Simone: "I'm not the one who should tell the world how [Floor] feels; she should do that herself. But I think she is very brave filling in those shoes, because already for Anette it was difficult to fill in for Tarja. If a really big band already has a singer which is so iconic, in a way, it's not easy to take that place. But she does it well. She's a wonderful singer, a wonderful entertainer, and she told me she's having fun with the boys, so I believe her."

On whether NIGHTWISH was a big influence on EPICA musically:

Simone: "Not musically. I was always a big fan of NIGHTWISH, like the first two records, when I started listening to metal with female singers, and I really loved the combination of the classical female vocal with very melodic metal. The classical singing and the film music are elements which both bands carry in their music."

On whether she has been following Tarja Turunen's career since Tarja was fired from NIGHTWISH:

Simone: "Yeah, I'm in contact with her as well. Actually, I was on Skype [with her] two days ago. And she is doing really well. She also has a baby now, so… She's also a mommy, and I also told her about my pregnancy, and she was very happy for me. And she said that it's doable — the touring and having a baby — so I'm gonna try it as well." 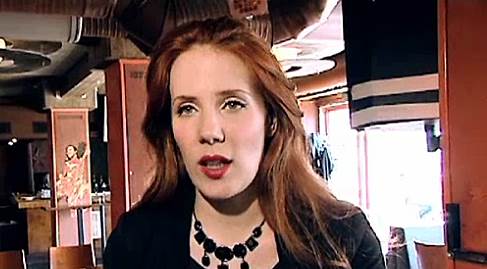