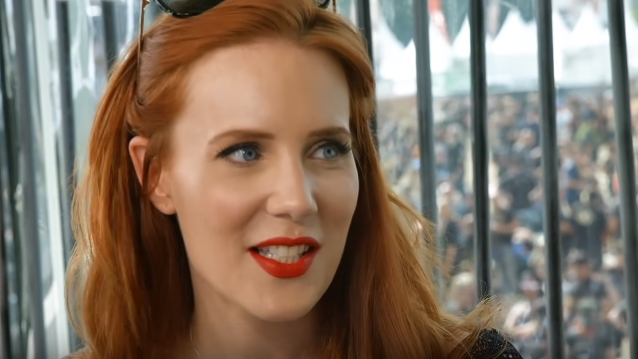 EPICA's SIMONE SIMONS: 'I Don't Have Any Stage Fright'

Canal Metal conducted an interview with frontwoman Simone Simons of Dutch symphonic metal giants EPICA at this year's Alcatraz Hard Rock & Metal Festival, which was held earlier this month in Kortrijk, Belgium. You can watch the chat below. A few excerpts follow (transcribed by BLABBERMOUTH.NET).

On the key moments of her musical development:

On how she came to join EPICA, which was originally known as SAHARA DUST:

Simone: "I was asked. I declined at first because back then, I was still in high school. I was a little bit shy of everything in the world, I guess. I was very insecure and I didn't want to be onstage. I've sung onstage two times and I hated it, so I was, like, 'I think it's better if you get a different singer,' but that didn't work out with the first singer they worked with. Then they asked me and I said, 'Okay, whatever. I'm just going to do it.' I had the feeling deep down inside. I'm not very a hippie, spiritual person, but I do believe a lot of things happen for a reason and when I got offered it for the second time, I thought, 'Okay, this probably has to be it for me and I should just do it and take a leap of faith and go with the flow.' Back then, I was Mark's [Jansen, guitar] girlfriend. When he left AFTER FOREVER, he started a new band and he knew that I could sing and that I loved to sing, but I told him I wanted to finish high school and a couple of months later, I did join the band. Sometimes you have to do things out of your comfort zone to just grow. Afterwards, you feel like, 'Wow, I did it.' You can be proud of yourself. But, the first shows for me, or the first show with EPICA and the first time I was onstage when I was 12, I was nervous. Now, it's like second nature for me. I don't have any stage fright, luckily. Otherwise, I would suffer a lot because we tour a lot. [Laughs]"

Simone: "Science fiction, I like the movies, but with some of the topics, Mark, he's really interested in quantum physics and science. There's like a red line going through all the lyrics. The lyrics are very spiritual, philosophical and scientific, but I'm not a scientist by any means. I would like to know how you create lipstick, that kind of science. [Laughs] Mark is more into the quantum physics. He explained to me the idea for the kind of concept or the red line going through it all and he's a more firm believer of the whole idea that all of this could be a hologram. I'm more like a philosopher that questions everything. I'm not easily convinced."

On what part of the album recording and touring cycle she enjoys the most:

Simone: "For us, it's all intertwined because we often write and record a CD in between touring. We've never really taken a big break from touring just to write and record. We would always fit it in between tours. When I was pregnant with my son, we took a couple months off from touring because I physically couldn't anymore and that's when we were writing 'The Quantum Enigma'. Shortly after I gave birth, I recorded the vocals. For me, I really like the writing process to record and to then perform the new songs, but I am not really a person who enjoys to be in the studio too long. To be onstage and play the new songs, just the end process when you have all the pieces of the puzzle, when it's all together, it's complete and you present it to the world because it's no better feeling for me then, of course, getting married and giving birth and all that, but when you are in the creative process, you have the ideas in your head, the melodies, the lyrics, it's not out there in the world. Then when the CD is there, everybody gets a glimpse inside of your brain, all of the creative ideas that you have, they come to life and somewhere right now, people might be listening to EPICA and that's a very great feeling. It makes me happy."

"Attack On Titan" was made available outside of Japan on July 20 via Nuclear Blast Records. The disc was recorded during the summer of 2017 at Sandlane Recording Facilities by Joost Van Den Broek. The original songs, which were influenced by the music of EPICA, were composed by Revo of popular Japanese band LINKED HORIZON.