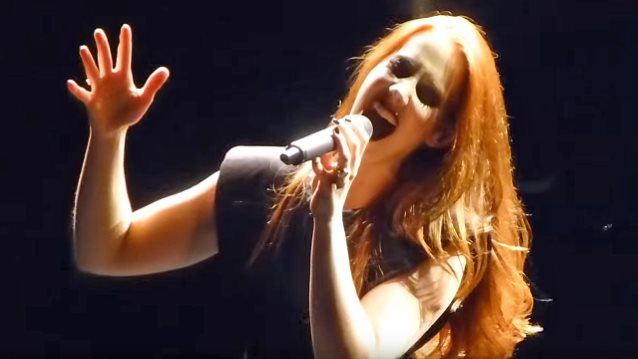 Singer Simone Simons of Dutch symphonic metallers EPICA was interviewed on a recent edition of Australia's "Blood, Sweat And Metal" podcast. You can now listen to the chat in the YouTube clip below.

Speaking about how the Internet has affected every aspect of the music business, Simone said: "I think it's a little bit the curse and the blessing of the Internet at the same time. And I don't wanna be pessimistic, but I think we have to go with what we have right now; I don't think you can go back in time."

She continued: "The Internet has improved a lot of things but also, for the music scene, has kind of made things worse. But, on the other hand, I don't like to complain too much; I just like to go forward. I try to use the Internet to do good, because nowadays you can promote yourself in a cheaper way than back in the day when you had to buy advertisements everywhere. So there are pros and cons to the Internet. And I have to say, I love the convenience of iTunes, 'cause I've got all the digital devices. I'm on the road… If I wanna buy a CD, I'll buy it on iTunes and then I have it everywhere. But that's legal downloading; I'm paying for the music."

Simone added: "When it comes to the illegal downloading, a lot of people don't see it as stealing, 'cause they do it from the comfort of their home [and] they don't realize how much time it takes to actually write the music that you can download in two seconds. I think it's the age nowadays where they don't see what goes on behind creating and writing, recording a CD; its value has kind of decreased in a way, or the respect for it… I don't know. It's a shame. Although the LPs, the physical product has been making a return, but that's not the younger generation; the younger generation wants everything digital. It's a shame. But I think that's just how things develop. It's the same with videos. Back in the day, you had the video tapes, then there were DVDs, and now you have Netflix, and nobody buys DVDs anymore. I used to pay twenty euros for one movie, and I pay eight euros a month in order to stream movies. Everybody has become so used to the convenience of how the media is being displayed and all these different forms of art. It's just a development of the modern age, and we have to go with it. But whenever I get the chance, I do like to explain that illegal downloading is really… it is really stealing, you know. You have to compare it to when you're actually walking into a CD shop and putting a CD in your pocket. But people don't… It doesn't get through their skulls that it's actual stealing. It's difficult."

EPICA recently completed a short North American run with support from MOONSPELL and STARKILL. It was the band's first North American tour in support of their latest album, "The Quantum Enigma", which hit the charts all over Europe and beyond.

EPICA is currently recording its next album for a tentative September release.