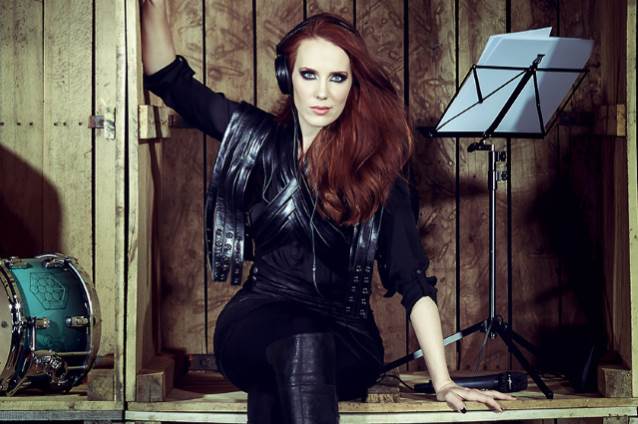 Josh Rundquist of That Drummer Guy recently conducted an interview with frontwoman Simone Simons of Dutch symphonic metal giants EPICA. You can listen to the entire chat below. A few excerpts follow (transcribed by BLABBERMOUTH.NET).

On the band's new "Epica Vs. Attack On Titan Songs" album, which features metal versions of the theme songs from the highly successful manga-series-turned-worldwide-aired-anime "Attack On Titan".

Simone: "It's an unusual thing for us to have done. It's a little out of our comfort zone. But, we're super-pleased with the end result. It's cool, because I first thought it was more like only a thing for Japan, but there's so many, how do you say? 'Admirers' of the genre worldwide and also, especially among the metal scene, so I think it's pretty amazing that we now get to share this with everybody. The metal fans, they're collectors, even though they might have heard it already on YouTube, they still want to have the physical or original product."

On where the idea for "Epica Vs. Attack On Titan Songs" originated:

Simone: "I was included a little bit later in the whole thing because I think, our manager contacted the band and said 'We have this option to do this.' The composer from these songs, from LINKED HORIZON, is actually an EPICA fan and he wanted us to do the cover tracks. We were contacted and thought, 'Okay, it's cool.' I first had to check out what is 'Attack On Titan' because it's not really something…I'm not into anime or I don't know much about it. I think it's cool, but it was new to me. We heard that this was an option to do the cover tracks and first, I had to do some research to see what it is about. Coen [Janssen], our keyboarder, he was like, 'You don't know this? It's huge in Japan.' I said, 'Sorry, no. I'll check it out.' I really liked the songs, but my first concern was 'How am I going to sing in Japanese? I don't think I could get the pronunciation right.' But, then we were told it would be translated into English for us to re-write the lyrics. Then, I was kind of reassured. [Laughs] But, I did not sing in Japanese because I don't think I would have done a good job. But, yeah, the composer from LINKED HORIZON wanted us to do the cover tracks and who contacted who exactly, I don't know, but yeah, we were in Japan the first time in 2016 or 2017 and we saw commercials out on the buildings. They had these huge LED screens and it was 'Attack On Titan' and I thought it was so cool. Of course, when you're in Japan, you see it a lot everywhere and we're not that big in Japan, but still, we got to do this job and it was quite an honor to do this."

On how EPICA was able to make this unique project work:

Simone: "Yeah, they kind of complete each other. The original songs are a little bit faster than the ones we did because for us, it was almost impossible to play and sing that fast. The original songs were much faster and we slowed them down with the exception of the ballad. We did the whole production like how we would do an EPICA CD. We worked with the same producer, went to the studio, worked with an orchestra and choir and yeah, did the whole package that we would normally do for an EPICA CD. We wanted to take it serious and not do it quickly. We wanted to come up with a great quality product."

On how long it took for her to feel comfortable with the project:

Simone: "When I was in South America with EPICA, then Joost [van den Broek] the producer, and I went through the songs to first see if the key was a good key for me to sing in so I could use the best side of my voice. So, we matched the songs to the perfect key for me to sing in. After that, we were then re-writing the lyrics to record demo tracks for us to practice on before the actual recordings and also, to send to Japan for approval, to see if they liked what we did. It's the same thing with the music as well. Isaac [Delahaye, guitar] and Mark [Jansen, guitar] re-wrote the guitars, came up with arrangements and the choirs, they added some secret EPICA parts and integrated them into the songs to give them a more of an EPICA touch. We did all this in between touring and while being on tour because nowadays, we have our laptops with us. We were writing lyrics in Colombia overlooking the square, sitting in the backstage, getting ready for the EPICA show, but also, at the same time, having the 'Attack On Titan' lyrics in my head."

"Attack On Titan" was made available outside of Japan on July 20 via Nuclear Blast Records. "Epica Vs. Attack On Titan" was recorded during the summer of 2017 at Sandlane Recording Facilities by Van Den Broek. The original songs, which were influenced by the music of EPICA, were composed by Revo of popular Japanese band LINKED HORIZON.