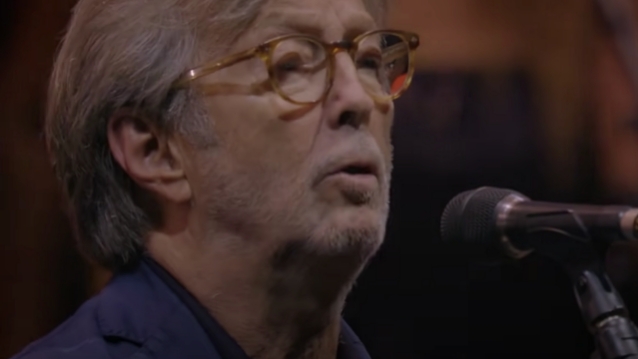 ERIC CLAPTON Gets Blasted For Stance On COVID-19 Vaccine Requirements: 'Once A Dick, Always A Dick'

Former QUIET RIOT singer Paul Shortino, TESTAMENT guitarist Alex Skolnick and THE WILDHEARTS frontman Ginger are among the musicians who have reacted to the report that Eric Clapton announced he will no longer perform at any venues that require attendees to show proof of vaccination. The announcement came after U.K. prime minister Boris Johnson's mandate that "vaccine passports" be required for entrance into nightclubs and venues by the end of September.

In Clapton's statement, he said that he would refuse to play at "any stage where there is a discriminated audience present."

"Following the PM's announcement on Monday the 19th of July 2021 I feel honor-bound to make an announcement of my own," Clapton said. "I wish to say that I will not perform on any stage where there is a discriminated audience present. Unless there is provision made for all people to attend, I reserve the right to cancel the show."

Shortino, who frequently "likes" tweets that amplify Republican talking points and that are derogatory to Democrats, praised Clapton for his stance, tweeting: "Right on @EricClapton stand up for Freedom." He added: "Amen @EricClapton We don't develop Courage by being happy everyday. We develop it by surviving difficult times and challenging adversity. #StandUpAndShout #Freedom".

Ginger, whose real name David Walls, was far more critical in his response to Clapton, tweeting: "I will celebrate Eric Clapton's death, just as I did those of Thatcher, Mary Whitehouse and my first stepfather." He went on to call Clapton a "fucking idiot."

Actress Valerie Bertinelli, who was married to late VAN HALEN guitarist Eddie Van Halen for many years, shared an article about Clapton's stance on vaccine requirements at concerts along with a photo of her, Clapton and her ex-husband, and she pointedly captioned the post, "Once a dick, always a dick."

Skolnick shared Bertinelli's tweet and wrote: "This tweet should be in the dictionary under 'No F's Given' (Go Val)".

This past February, Shortino told the "Ouch, You're On My Hair" podcast and radio show that he was not concerned about contracting COVID-19, the disease caused by the novel coronavirus. He said: "I'm not really afraid of it. I think [other] people are more afraid of it. I'm such a believer in the law of attraction that if you're not afraid of it, and you put out there that you're not afraid of it, I don't think you're gonna contract it. I know people that have contracted it who were so afraid of getting it. And then they just put it out there."

Once a dick, always a dick. https://t.co/WdlN90tgi1pic.twitter.com/BQs97vYGia

This tweet should be in the dictionary under “No F’s Given” (Go Val 🔥) https://t.co/9LJMEw2dVO

I will celebrate Eric Clapton’s death, just as I did those of Thatcher, Mary Whitehouse and my first stepfather.

I respect the fact that you would never celebrate the death of someone.

Anyway, how the fuck can a blues guitarist also be racist?!? 🤨

Right on @EricClapton stand up for Freedom .

Amen @EricClapton 🙏🏻🙏🏻🙏🏻We don’t develop Courage by being happy everyday. We develop it by surviving difficult times and challenging adversity. #StandUpAndShout#Freedom