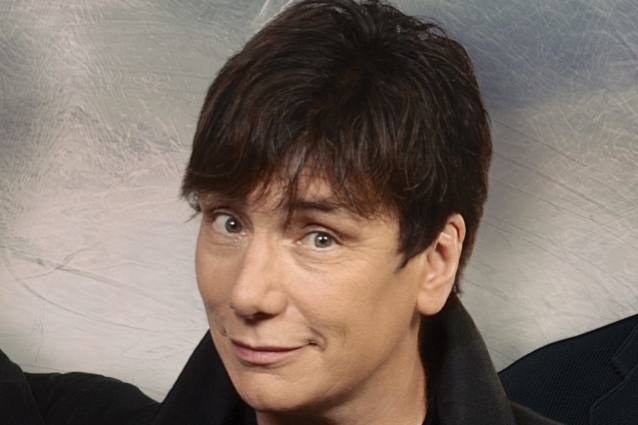 ERIC MARTIN On MR. BIG's Future: 'Without PAT TORPEY, The Wind Has Been Taken Right Out Of Me'

In a brand new interview with KNAC.com, MR. BIG singer Eric Martin spoke about the band's future, six months after the passing of founding drummer Pat Torpey. "Well, as you know, I do a lot of solo shows, I play solo acoustic shows, anywhere from Moscow to Hood River, baby!" he laughed. "Billy [Sheehan, bass] has SONS OF APOLLO and THE WINERY DOGS — great bands — and, as you know, also has a solo career and he's working on a new album now.

"We are doing some touring this summer; we just got back from Australia, Thailand and China," he continued. "We did some shows with EXTREME and it went over wonderfully. I don't know why we didn't think of that earlier. We're heading to Europe to do the European festivals, which should be fun. I've been home for about a week, but it hasn't been till the past two days that I've been reflecting on MR. BIG.

"I've been working with my partner André Pessis, who I've worked with throughout MR. BIG's existence. We're trying to get a jump on writing material for a 'possible' MR. BIG album for 2019. That could very well be our last. We're booked to do some touring in June of 2019."

Martin added: "I'll be honest, without Pat Torpey, the wind has been taken right out of me.

"Billy would miss it just as much as I do, but he's got enough stuff to keep him busy. Paul [Gilbert, guitar] would probably love to get off the road, stay home and make solo records.

"We've been in this band for 30 years now, but without Pat Torpey, there's a huge emptiness. I don't think we could find an equivalent to Pat. It's impossible. I suppose there's a chance that Billy can talk me out of it, but right now, I just don't know."

Torpey passed away on February 7 at the age of 64 from complications of Parkinson's disease.

The band, formed in 1988, produced numerous hit songs that ranged across a wide array of rock genres — be it ballads, heavy metal, or blues rock. Their hits included "Alive And Kicking", "Just Take My Heart" and the chart-topping ballad "To Be With You".