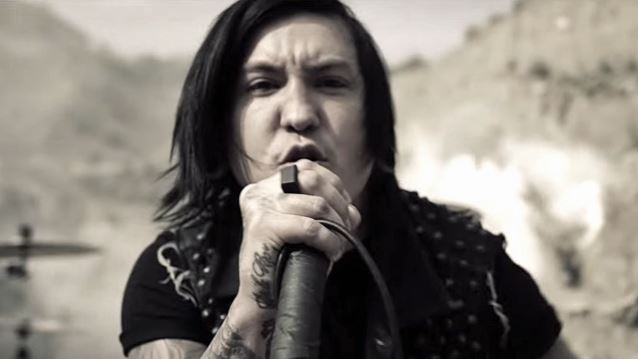 Behind-the-scenes footage from the making of "Just A Memory", the new video from ESCAPE THE FATE, can be seen below. The song is taken from the band's new album, "Hate Me", which will be released on October 30 via Eleven Seven Music.

When a band has had as storied and, at times, controversial a first decade in the limelight as ESCAPE THE FATE, there is often a temptation to focus on that past, rather than concentrating on the future. Yet as they stand on the cusp of releasing their fifth, and arguably most significant studio album to date, the upcoming chapters of the Vegas quartet's career not only look bright, but are set to resolutely be their best yet.

"This new album is, without any question in my mind, the best thing that has ever borne the ESCAPE THE FATE name by a distance,"enthuses frontman Craig Mabbitt with no hint of hesitation. A remarkable statement given the last two ESCAPE THE FATE records gatecrashed the Billboard Top 30. "Sonically we've always been a diverse band who have everything from ballads to really heavy songs — and our fans expect that — but I think on this album we've gone full force with it. The heaviest songs are the heaviest we've ever written, and the poppy songs are the poppiest we've ever done. We came to this kind of ‘Who cares what people think of us'realization this time around — we're amplifying everything that we love about this band in all directions and it has been incredibly liberating."

Indeed, with the group (completed by drummer Robert Ortiz and guitarists Thomas "TJ" Bell and Kevin "Thrasher" Gruft) now blessed with the most stable and creatively fertile lineup they've enjoyed in years, ESCAPE THE FATE are gearing up to show the world the scale of the talents that, in truth, they have long possessed. "We wrote probably 50 or so songs in total," explains Thrasher. "There are songs on this record that I've worked on in private for years but have only just come to fruition. There's probably half a decades work wrapped up in this thing!" "It has bee a real team effort this time around," continues Mabbitt. "We have all worked on lyrics, all contributed to the songwriting process. We're the most unified as a team I think we've ever been, certainly in my history in the band. I actually wish we hadn't done a self-titled album already because I think this is our most definitive statement yet."

A significant part of fine-tuning statement has been the introduction of Grammy-nominated producer Howard Benson (PAPA ROACH, MY CHEMICAL ROMANCE, MÖTÖRHEAD) to proceedings. "He pushed us incredibly hard to expand ideas beyond where we initially thought they could go," says TJ. "He's a master at looking at a song and picking out the smallest details of what could be improved but doing so in a way which makes sense for the overall tone of the record." "He challenged me more than anyone ever has in a studio environment," concurs Thrasher. "From technique to tone he fine tuned everything we were doing and made sure we were giving 110%. I won't lie, it was stressful at times but he is a great producer — you only need to look at his track record to see that!"

Indeed, for new new blood Thrasher — both playing and writing extensively on his first ESCAPE THE FATE album, it has been an opportunity to really earn his stripes. "I wanted to show exactly what I can do," explains the axeman. "Having been a session player for years but always loving this band's output, there was a responsibility on my shoulders to prove myself. I tried to take everything I'd learnt over all the years of playing and pour it all into these songs. And what's great is that the guys gave me all the support I needed — it's been one of the most free and enjoyable writing environments I've ever enjoyed."

The end result of this hard-fought creative battle is a collection of songs spilling over with stadium-wrecking hooks, as well as significant slice of the jackhammer punch fans of the band have come to know and love. Perhaps most crucially though, there is an abiding sense that this is ESCAPE THE FATE at their most bruisingly motivated. "Lyrically, a lot of these tracks are based around the hate we've received over the years and just embracing that and using it to our own advantage," says Mabbitt. "I've had to step up to the plate lately, for the fans as much as anything else, because they take the name ESCAPE THE FATE very seriously and I owe them something for that, for all the support they've shown us over the years. It's very humbling for me to be able to listen to this collection of songs and think about where we've come from and what we've been through to get to this point."

To that end, first single, the anthemic "Alive", comes replete with a lead-heavy dual guitar attack and a sky-scraping solo, underpinned with a soul-baring vocal performance that underlines, emboldens and italicizes both the band's survival instinct and their indefatigable determination to emerge victorious. From there, the lung-bursting chorus of "Remember Every Scar" serves as a powerful lament to life at the bottom of the bottle while the likes of "Breaking Me Down" and "Let Me Be" revel in a dynamic rise and fall which sees the band on taking their sound to a place that is sure to raise the eyebrows of both fans and critics alike. Naturally, those with a penchant for the heavier stuff are amply catered for too, "Just A Memory"'s thrash-and-burn-a-circle-pit-starting sonic landmine to match anything in the band's catalogue to date: truly, this is a group at their most diverse and powerfully self-assured. "Like I say,"smiles Thrasher, "I think there genuinely is something in there for everyone."

And so, what we are about to witness is a re-incarnated, reborn, rejuvenated ESCAPE THE FATE firing on all cylinders once more. With a stint on this summer's Warped Tour already under their belts and the promise of a global touring schedule to come, this is a band who, after a ten-year tenure, are still as hungry as they've ever been. "It's the start of a new era for us,"confirms Mabbitt. "We're getting back on our feet, putting our middle finger up to the world and proving ourselves individually and collectively. Everyone in this band now wants the same thing: we want to play our music for as many people as possible and be a unit, a gang. We've been envious of bands who have always had that but now we have that and it's a wonderful feeling."

The message from the ESCAPE THE FATE camp is louder and clearer than it has even been in the past: "We're coming for everyone and we aren't taking any prisoners," concludes Mabbitt. 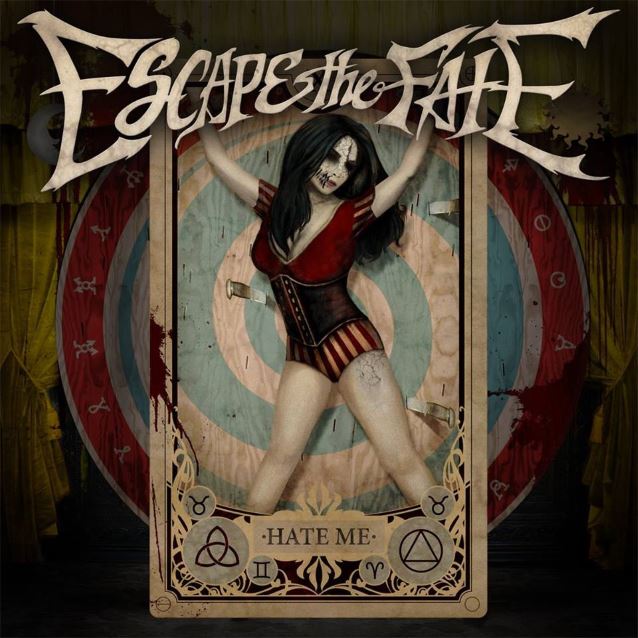