In 1986, Sweden's biggest hard rock act EUROPE released its milestone album "The Final Countdown". The LP went on to worldwide success and continues to be a mainstay in playlists all over the world.

To celebrate that special anniversary, the band will be staging a series of very special concerts.

For the first time ever, these shows will feature "The Final Countdown" album played in its entirety. The band will also be performing hits spanning their musical career.

EUROPE singer Joey Tempest explains: "With a catalog of songs as big as ours, it is hard to devote so much of the setlist to one album. But this anniversary is special and we want to give the fans what they have asked for.

"The whole band is proud and excited to play the whole album from start to finish, especially as this, our third album, made it possible for us to fulfil our dream to become an international touring band. To make it extra special, we will try and play songs from 'War Of Kings' and other albums we haven't played before and at the same time we want to design a show that will be majestic and memorable for all of us.

"Hope to see you all at these special dates!”

While always venturing forward, EUROPE has had a great couple of years. Last year they won a prestigious Classic Rock award at London's Roundhouse and a people's choice award in Sweden called Rockbjörnen and have been touring in support of their critically acclaimed 2015 release, "War Of Kings", produced by Grammy winner Dave Cobb (RIVAL SONS)

Just before these special "Final Countdown" shows, EUROPE will head back into the studio to record a follow up to "War Of Kings", with an eye to a release date in April 2017. The album, as yet untitled, will have an extensive tour schedule to support the release, endeavoring to take in territories not visited in some time.

Says Tempest: "We will release our 11th studio album in 2017 and are enjoying a successful second part of our career since we started up again in 2004. Five new albums, three live DVDs and countless shows and we're still feeling adventurous and creative. No doubt we have the best job in the world and our fans, old and new, are carrying us through it all."

In addition to "The Final Countdown" anniversary tour dates, the UDR label will release a very special limited-edition 12-inch three-track "sparkle blue" colored vinyl EP featuring a new 2016 recording of "The Final Countdown". The record is exclusive to the stores that are participating in the annual Record Store Day (April 16) and only in UK, Europe and Australia. For fans in the U.S. and other territories, there will be a very limited number available on a first-come, first-served basis from the UDR webstore from early May. A digital download version of "The Final Countdown 2016" will be available via iTunes on April 29. 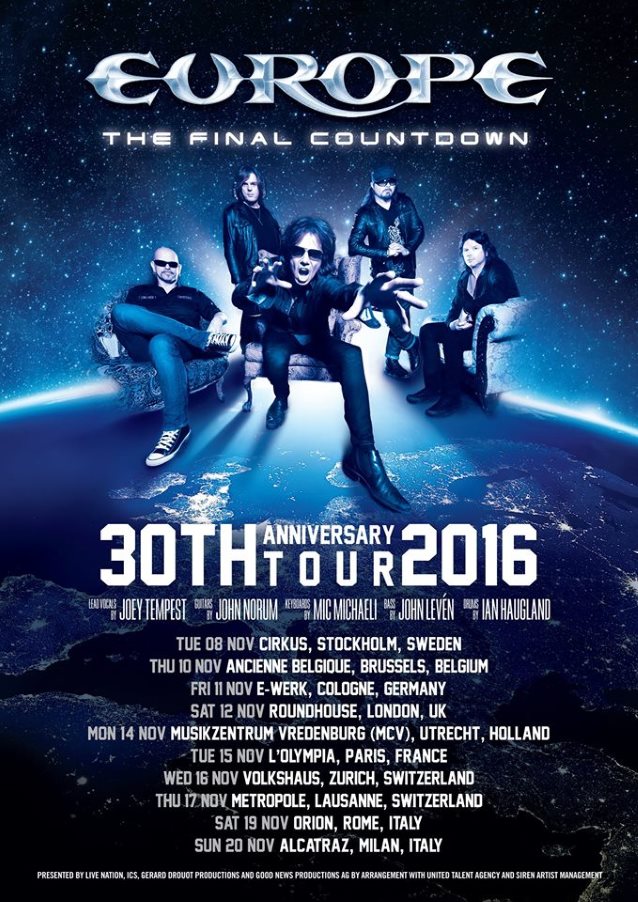