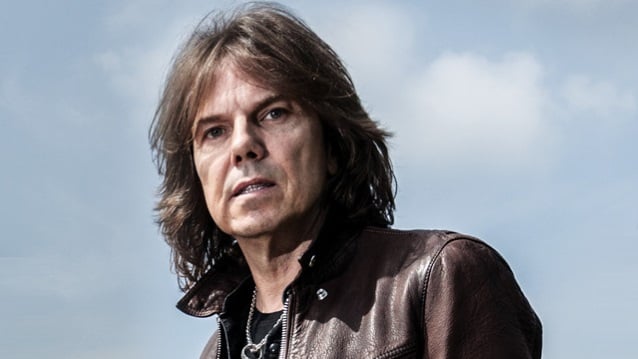 According to EUROPE vocalist Joey Tempest, when the group recorded 1986's "The Final Countdown", they had a "little feeling" that the now-legendary title track would be well received.

"I remember listening back to '[The] Final Countdown' with [keyboardist] Mic Michaeli in San Francisco when we mixed in Berkeley, in Fantasy Studios," Tempest recently told Australia's Heavy magazine (hear audio below). "We stayed on late at night and just cranked the volume up and looked at each other and thought, 'Wow, this is special. It's different. It's, like, six minutes long, and it's kind of different.' Also, other tracks later on in our career as well, when you finish recording, you know, 'Oh, man — this song sort of stands out a little more from the rest.' It happens. You sort of get a feeling when you finish an album that there's a few tracks that [stand out]. You live with it for a while — you've rehearsed it, you've recorded it, you've mixed it, so you are sort of ahead of the listener. You've lived with it maybe a year or half a year, and yeah, you know this track is kind of special."

Tempest says that the group had a similar feeling about the title track to their latest album, 2017's "Walk The Earth", which recently won a Grammis award (Swedish Grammy equivalent) in the "Best Hard Rock/Metal" category.

"The title song is something we're incredibly proud of," he said. "That was one of the songs when we left the studio that, 'Oh, we should open the album with this. This should be the title of the album.' This song just gave us goosebumps in the studio when we finished it, and that song is really working out live."

"Walk The Earth" was released last October via EUROPE's own Hell & Back label through Silver Lining Music. The follow-up to 2015's "War Of Kings" was laid down at London, England's legendary Abbey Road studios and was produced by Dave Cobb, who also helmed the band's previous disc.

Tempest told Hear 2 Zen that the experience of recording at Abbey Road "was really, really cool. I have been trying to get the band and producers to record in the U.K. for years now; I have been trying to just work in various studios here," he explained. "But a friend called me up and said that he may be able to get us into Abbey Road Studios. He said, 'It's such a busy studio, but I might be able to get you two weeks.' I called the others, and then everyone got really excited about recording in the U.K. [Laughs] We got to use old equipment that PINK FLOYD and John Lennon and THE BEATLES used, which we then combined with new technology and techniques, and we really had a blast. Dave Cobb came over from Nashville, where he lives now. He really enjoyed it; he was like a kid in a candy store, just enjoying all the equipment and recording techniques. We were very lucky to get everything done in two weeks and then mixed it. It was a great experience."

Listen to "Europe Interview" on Spreaker.
Find more on Europe