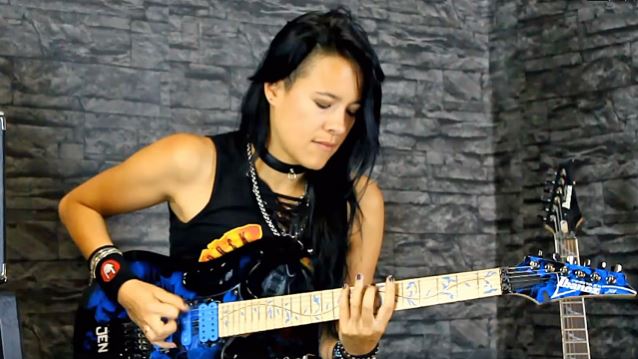 EVANESCENCE has parted ways with guitarist Terry Balsamo and has replaced him with Germany's Jen Majura (pictured; EQUIBLIBRIUM, KNORKATOR).

Comments EVANESCENCE singer Amy Lee: "After two albums, countless adventures around the world and on the stage, Terry's time with EVANESCENCE has come to an end. As difficult as that is, we stand unified knowing it's the right thing for all of us. We will ALWAYS love you, Terry, and wish you all the happiness, health, and love in the world!

"Now for the exciting part of this announcement: Ladies and gentlemen, meet Jen Majura.

"After scouring the globe, I found EVANESCENCE's missing piece in South Germany. She plays like a supervillan, sings like an angel, and laughs like a great friend. We spent a few days together last week in New York sharing eerily familiar life stories, sushi, artistic inspiration, other people's shoes, and SO many laughs! (Yeah, okay, and maybe there were a couple of stiff drinks mixed in there) wink emoticon

"We are all so excited to play together this fall and bring the show to a whole new level. CAN'T WAIT! I know you will show her all the love and respect a strong, talented woman deserves. I couldn't be happier to welcome our new sister to the band."

EVANESCENCE has also been confirmed for Ozzfest Japan, the first major international music festival to ever travel to Japan, which will return to Makuhari Messe Arena (just outside of Tokyo) Saturday, November 21 and Sunday, November 22. The two-day event, which will feature more than 22 performers, will be headlined by two Ozzfest veterans: festival namesake OZZY OSBOURNE (who will perform as Ozzy & Friends) and KORN.

Lee, who became a mother for the first time in July 2014, told Rolling Stone last year that she had no plans to hit the studio or the stage with EVANESCENCE, prompting many fans to fear that the band was finished.

In an attempt to assure fans that EVANESCENCE wasn't over, Lee posted a message on her Facebook page in September, explaining that "EVANESCENCE is a part of me — it just isn't a complete picture of everything I'm capable of."

Speaking to "Sixx Sense With Nikki Sixx" co-host Jenn Marino, Lee voiced pretty much the same sentiments, saying: "It's kind of frustrating sometimes if you read the Internet, ever, about anything. So, literally, I get a little frustrated when I'll literally say, 'No, the band is not over. We're just not doing it now.' And then every response is, 'No. EVANESCENCE is dead.' It's like, 'Man, that's so not what I said. Why do you have to make drama?' I said we're not doing it now. I'm totally open-minded. And, I don't know… I would just get bored doing the same thing forever. There's more to me than that."