EVANESCENCE singer Amy Lee has announced that she is expecting her first child, according to The Pulse Of Radio. The 32-year-old Lee revealed the news via a post at her Twitter account on Saturday night (January 18),writing, "Ok I can't keep it a secret anymore — I've been working on a very special new project for 2014 — A BABY! Josh and I are expecting! I'm so happy!"

Lee did not divulge if she knows whether she's having a boy or a girl, or when the baby is due.

The singer has been married to Josh Hartzler, a therapist, since May 2007. The couple live in New York City.

Lee told The Pulse Of Radio a while back that she missed her family when she was on the road and was starting to think about starting her own. "Definitely," she said. "That's something I long for more and more the older I get, for sure. Not just about kids of my own, but just spending time with my living family. [laughs] Something I really end up missing a lot on the road is that, you know, just down home family time. You miss a lot of that stuff when you're on the road and it's starting to hit me, like, 'Ooh, I can't get that back.'"

With EVANESCENCE currently inactive, Lee recently completed her first film score, with collaborator Dave Eggar, for the movie "War Story". The film is premiering this week at the Sundance Film Festival in Park City, Utah.

Lee is suing her label, Wind-Up Records, for at least $1.5 million over unpaid royalties and other alleged misdeeds, including efforts to sabotage EVANESCENCE's career.

The most recent EVANESCENCE album, a self-titled effort, came out in 2011. 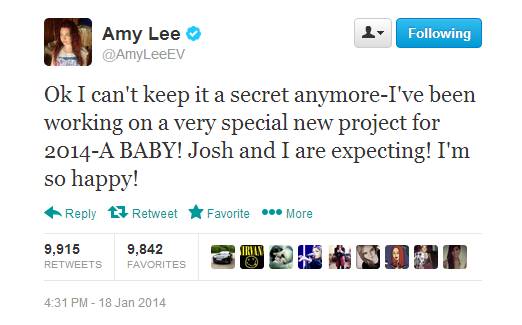