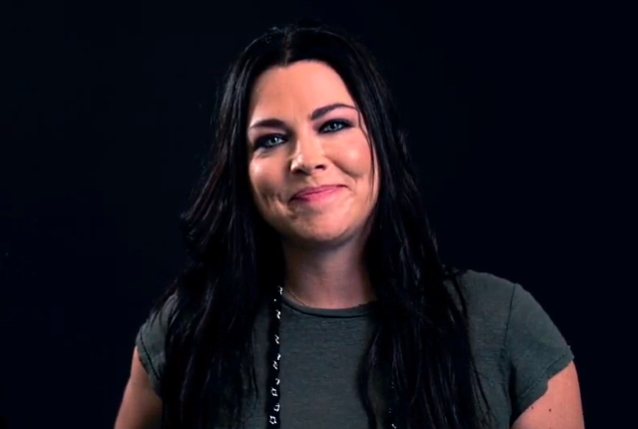 In a new interview with NowThis Entertainment, EVANESCENCE singer Amy Lee was asked what advice she had for people to manage their mental health and well-being during the COVID-19 outbreak. She responded (see video below): "I struggle with my own issues too. It's hard to always give advice, because I think I know the right answers, but I don't necessarily always do great. Anxiety is a tough one right now, because we never know what's gonna happen next really, but we kind of do. And right now we really don't. It's hard to know day to day, what are we gonna be doing later this year? I'm not really totally sure.

"Do something that makes you feel good, because you did something that's outside of yourself," she continued. "That's what made me start the band — making music. Because making something, whether it's baking a pie or making a song, at the end of it, you feel really good because something exists that didn't exist before you were there. So I think that creation in general is really healing — painting, baking, whatever."

The video for "Wasted On You" was shot by each band member — Lee, bassist Tim McCord, drummer Will Hunt, lead guitarist Troy McLawhorn and guitarist Jen Majura — on their iPhones while currently in isolation at their homes.

In a separate interview with Music Week, Lee said that a handful of new EVANESCENCE songs are completed and mixed, and while they're "all different," she added, "I think so far the one thing that ties them together is it's going to a place that's even more raw."