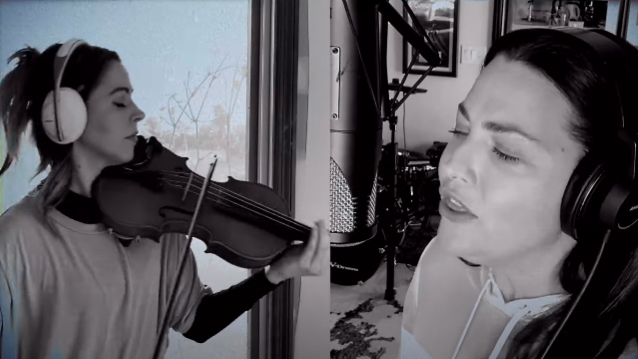 EVANESCENCE singer Amy Lee reunited with famed violinist Lindsey Stirling to record a special quarantine version of the new EVANESCENCE single "Wasted On You" as part of Lindsey's "String Sessions" series. A video of the performance, including a short interview, can be seen below.

Amy tweeted on Friday: "It was so good reuniting with @LindseyStirling on her #StringSessions series! Cant wait for you to see what we did with #WastedOnYou."

Added Lindsey: "I'm so lucky to have been able to go on tour with one of my idols, and now she's my next guest on #StringSessions! @Amy Lee and I perform @Evanescence's new song 'Wasted On You'."

Stirling previously guested on the EVANESCENCE song "Hi-Lo", which was included on the band's "Synthesis" album, a reimagining of some of EVANESCENCE's best-loved tracks — as well as a couple of new ones — recorded with a full orchestra and electronics.

EVANESCENCE and Stirling teamed up for co-headlining 2018 summer amphitheater tour across North America. Both artists' shows were accompanied by a full orchestra.

Lindsey told the Arizona Republic in a 2018 interview: " I loved EVANESCENCE [in high school]. And I still do. To this day, I have so much respect for Amy Lee. And getting to watch her perform every night, she's such an incredible powerhouse. I feel like I have a lot to learn from her and what she's done."