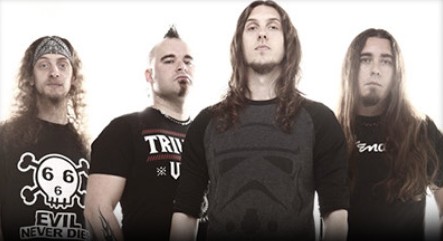 "In Memoriam", the new video from British thrashers EVILE, can be seen below. The clip was shot on April 29 in the North of England with director Ben Thornley of Sitcom Soldiers (THRICE, THE BLACKOUT, DEAF HAVANA).

"In Memoriam", which is inspired by the group's late bassist Mike Alexander, who died in 2009 following a blot clot on his lungs, is available now as a digital single on iTunes, including an acoustic version of the track, a radio edit, and the official music video.

Commented EVILE drummer Ben Carter: "We are really excited for our fans, both new and old, to see our video for 'In Memoriam'. It's a different sound and approach for us, definitely, but we hope our fans appreciate the sentiment and reason this song exists. There's a lot of context in the song that everyone will at one time or another relate to, and we hope we have captured that essence in the video.

"We didn't want to rush this video and get it wrong at all; we didn't want there to be any falseness, so what we have created is something which we are all very proud of, which perfectly captures everything we felt after losing Mike, and moving forward with [new bassist] Joel [Graham]. We hope this becomes a mainstay of our live set in the future, and we also hope that everyone who watches takes something positive from the video. Live life, and enjoy!"

Added EVILE lead guitarist Ol Drake: "The initial idea was to release the 'Cult' video, as we did, then immediately get onto recording the video for 'In Memoriam'; this was easier said than done. It's been well documented why the song exists. When it came to getting the 'right'/'appropriate' treatment for the video, it was a lengthy process. The song is so close to all of us that we wanted to make sure the video complemented the song and its subject matter, and that all four of us were happy with how the song will be portrayed visually. If we'd have settled on the first idea after 'Cult', we wouldn't have been happy, so amidst touring and gigging, we've been working hard on getting this 100% before we move on to the next video. The song is basically about loss, which we can all relate to, so we wanted to express that in the video, while staying respectful to why the song exists."