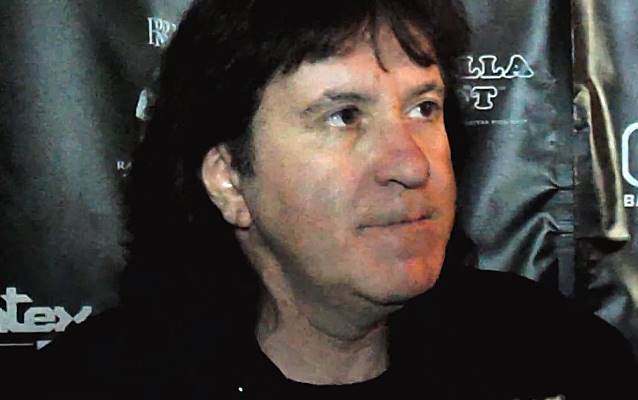 VintageRock.com conducted an interview with drummer Simon Wright (DIO, AC/DC, UFO, DIO DISCIPLES, Geoff Tate's QUEENSRŸCHE) at the Bonzo Bash NAMM Jamm 2014 "The Ultimate Celebration To The Ultimate Drummer - John Henry Bonham Of Led Zeppelin", which was held on Thursday, January 23 at The Observatory, in Santa Ana, California. You can now watch the chat below.

In a 2011 interview, Wright described Bonham as "incredible. He had a lot of attributes which make for the ultimate drummer, I think: attitude, power, musicality, groove, sensitivity and a hell of a sound."

He added in a separate interview: "John had such sensitivity and such songmanship. He wasn't just a basher; he was so soulful."

When asked by BlastzoneOnline.tk in an August 2011 interview why he left AC/DC, Wright said, "Well, I had been in the band for about eight years and I began to get complacent about things. Don't get me wrong — they are an incredible band, as we know, but I needed to expand on my drumming more. Branch out a bit. I think they noticed this in me — I guess it happens — so it was time to move on. I will never have enough thanks for the amazing journey they took me on. They are great people and a killer band."