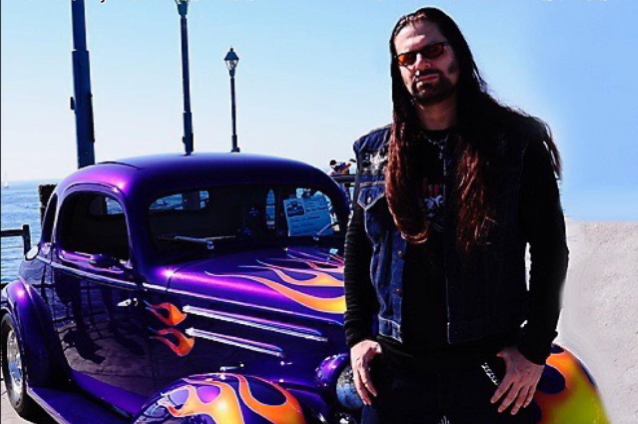 Former ANTHRAX frontman Neil Turbin spoke to MetalAsylum.net about how his songwriting approach has evolved in the four decades since he sang on the band's classic debut album, 1984's "Fistful Of Metal". He said (as transcribed by BLABERMOUTH.NET): "For me, in heavy metal, the place that I see myself, really, is with the progressive power side and the thrash side. So it brings a melodic intelligence to the thrash side. Because thrash is cool, and I know I was part of bringing thrash to become a genre — that was part of what I contributed to — but, for me, it's always been about having something that you can walk away from and remember how the song goes and have a melody. And when you don't have a melody, you just have riffs that don't really — it doesn't connect; it's just a million different riffs. My job was to connect those riffs and to bring the melody together."

He continued: "When I was a co-writer on 'Fistful Of Metal' and I came up with all the songtitles and all the ideas for what the songs were about, what all of these arrangements were gonna be, how they could fit it together — they weren't just some riffs that maybe they fit, maybe they didn't — I couldn't do that in the rehearsal studio, because it was so loud and it wasn't a fellowship type of thing. It was, like, hey, they're gonna go in there and blast their amps as loud as they can and turn it up and get their guitar jollies out. I mean, yeah, I understand. And that's what bass players like to do, and drummers too — they wanna go out there and play and get their aggressions out. We would play these two sets every night, or three sets, but we really didn't connect on the songwriting. They had an idea, or they brought it into rehearsal, but it was really hard for me to kind of sit down on the drum riser and try to write out lyrics. So I had to do that on my own — I had to take it back to my lab at home. I had to take it back to my home studio — and at that time, it wasn't a home studio; it was my desk for school [laughs] at home."