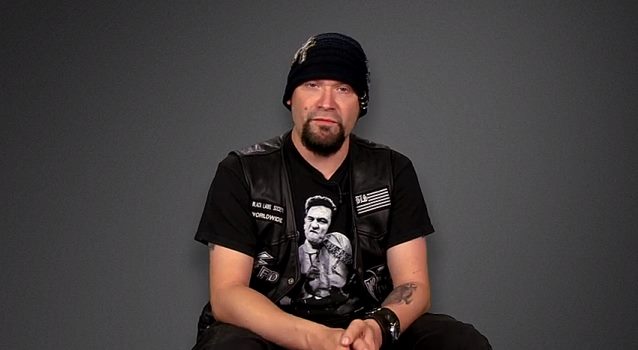 Guitarist Nick Catanese recently spoke to DJ Rob of MetalHeadRadio about his departure from BLACK LABEL SOCIETY and the formation of his as-yet-unnamed new band with Kevin Martin (CANDLEBOX),Morgan Rose (SEVENDUST),Adam Kury (CANDLEBOX) and Lenny Cerzosie (THE INFINITE STAIRCASE). You can listen to the chat below.

Speaking about his exit from BLACK LABEL SOCIETY, Catanese said: "Trust me, after 17 years, leaving that band was not easy. It's kind of like leaving a marriage. But I just had to weigh out the pros and cons for me and my future and what's gonna make me happy.

"The big thing is, through Zakk [Wylde, BLACK LABEL SOCIETY mainman] and through being there for as long as I was, just all the connections and friends that I came up with… and, honestly, the fan support, really… That was the thing that worried me the most — how are the fans gonna be, as far as, 'Oh, you're a traitor. Blah blah blah.' And I got such an outpouring of just people going, 'You know what, dude? This is something you need to do. We got your back.' And there wasn't one person that said, 'You made a bad choice.' They know that I gave everything that I had to the band, and now it's, see what I can do. It's just like Zakk left Ozzy [Osbourne's band] to do PRIDE AND GLORY. He wanted to do something and experiment with things that he liked and he did it. And then out of PRIDE AND GLORY came BLACK LABEL.

"It's scary. It's scary to sit there and leave your nest where you know that [it's] your security blanket. But at the same time, you're going, 'Wait a minute. I need to write. I need to be in the studio. I need to express myself and actually hear something that was a collaborative effort and everybody put their cents in it.' I mean, that was the thing that I kind of wanted. Even that one show with the FOO FIGHTERS, that documentary that was on — I think it's called 'Back And Forth' — the one part that really got me was this last record that they did at Dave's [Grohl] house. The whole band came and they did it in the garage and the families were there. They are in the pool and they're hanging out and they're laughing. I'm, like, you can hear that in the record. It's a band. They dig being around each other and they write off each other's energy and you can hear all that stuff. So that's kind of something I wanted to do. And I am happy…. I really needed this — for me, for my soul."

Regarding the fan support that he has received in the months following his departure from BLACK LABEL SOCIETY, Catanese said: "It makes me sad but it makes me happy at the same time. People are, like, 'That side of the stage is different now.' I mean, [new BLACK LABEL SOCIETY guitarist] Dario [Lorina] goes up and… I've seen videos. I mean, the kid's a great player. He plays piano and everything… But there was a connection that I had with the crowd. Playing, it was almost secondary to me. I was more connecting with the fans, like, in the front row. Like, I would walk up to the security guard and put a pick on his head and see how many picks I could get on before he realized I put it on there. And the front row is cracking up. And if someone had a cool VAN HALEN shirt or a KISS shirt, I'd point them out. Or throw a pick to somebody until I got it to them.

"I sort of learned… I actually put Dimebag [PANTERA] and Gene Simmons [KISS] as far as a stage persona. 'Cause, I mean, Dime was so great fans with the fans. And Gene… I actually have a memory [laughs] I remember going to see KISS. It was… ahhh, God… It was early on. I was standing there and it looked like Gene was pointing right at me. And just this feeling of, 'My God, my God, he saw me!' Not that there was, like, two girls that were standing by me that he was probably pointing at, not me, but at that point, I thought it was me. And so that feeling, that you actually made a connection with somebody that you went to see, in, like, one of your favorite bands or whatever, that stuff is important and people hopefully dug that and had fun with it.

"I really thank everybody that has been supportive and on board with me. Like I said, that was one of the things I was thinking when I did it. I [imagined] my almost 20,000 [followers] on Twitter just going to zero — everybody just abandoning ship, like, 'We're out. See ya.' But that didn't happen. I actually gained more [followers], which was pretty cool."

The initial idea for Catanese's new band was conceived in 2013 when Martin, Rose and Cerzosie released a single to benefit victims of Hurricane Sandy called "The Pride" with Cerzosie's band THE INFINITE STAIRCASE. Also featured on the track were BLACK LABEL SOCIETY's Zakk Wylde and John "JD" DeServio. The musicians gelled so well that talk began early on of future collaborations. With everyone's ever-changing schedules, it almost seemed impossible — that is, until a few months ago when the Cerzosie brothers reached out to everyone with a common break in schedules coinciding mid-May. With a brief break in SEVENDUST's current tour schedule, CANDLEBOX finally lightening their dates after their very successful 20th-anniversary tour and Catanese having just announced Lenny Cerzosie as the singer of his first new project since leaving BLACK LABEL SOCIETY at the end of 2013, everything finally fell into place.