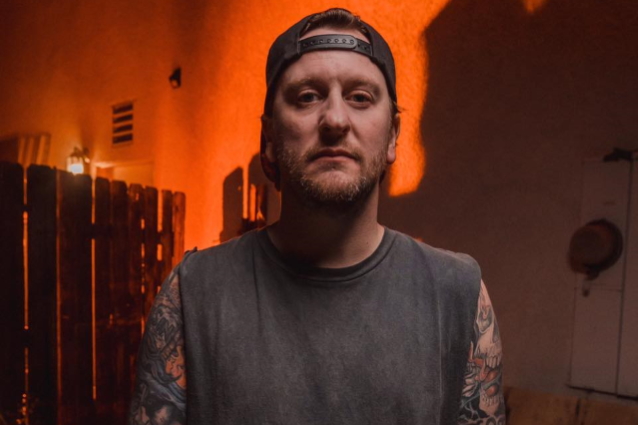 Longtime BULLET FOR MY VALENTINE drummer Michael "Moose" Thomas says that the band's music became "too safe" in the years before his departure.

In a brand new interview with Australia's Wall Of Sound, Thomas spoke about his exit from BULLET FROM MY VALENTINE, saying that he no longer felt inspired by the music the band was writing.

"BULLET got very stale," he said. "After the third album, we were trying to get a bit of cash, because it is your job. But it just got boring… It was just too safe with BULLET. We started recording our fourth album, 'Temper Temper', and we were just writing for radio, which is definitely the wrong thing to do."

"When I joined KILL THE LIGHTS, we were just, like, 'Fuck radio. We have our own sound,'" he said. "I grew up with a lot of punk rock and none of that is on the radio. We just enjoy what we're playing, and that's where we are at the moment, just being ourselves."

This past February, Thomas told the "No Fuckin' Regrets With Robb Flynn" podcast that he didn't leave BULLET FROM MY VALENTINE of his own accord.

"We'd done the last album [in 2015], which was 'Venom', which was kind of more back-to-the-heavier-roots type of thing, which I was a lot happier with; I think everyone was," Thomas explained. "And it was on that album we left — Jay [bassist Jason James], and then I left a year later. So we finished 'Venom' and then started touring 'Venom'. It was on the European tour cycle of 'Venom' that I left and didn't return. I would have gone back [on tour], but no one answered my e-mails."