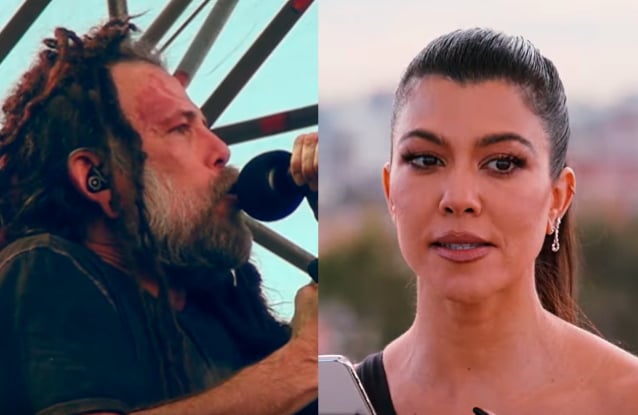 In the widely circulated photo, Kardashian is seen sporting an "Eaten Back To Life"-era long-sleeve T-shirt from the death metal veterans while she and her boyfriend, BLINK-182 drummer Travis Barker, were in Venice for the Dolce & Gabbana show. Her stylist, Dani Michelle, has since confirmed to Vogue that Kourtney borrowed the shirt from Barker, who has a large collection of punk and metal t-shirts. "Kourt has told me before that his closet is an archive itself. She can pick any t-shirt to wear and it's the softest, coolest thing ever," Michelle told Vogue. "Sometimes she just wants to raid it."

On Friday (September 3),Barnesshared an article about Kourtney's latest wardrobe choice and he wrote simply: "Posers." He also tagged Vogue writer Liana Satenstein and wrote in a separate tweet, "here's my response", adding a thumbs down emoji to really express his disapproval.

Kourtney is just the latest in a growing trend of celebrities wearing heavy metal t-shirts as high fashion. Rapper Kanye West has previously been criticized for repping vintage band tees, and Kourtney's sister Kim Kardashian is regularly spotted wearing METALLICA t-shirts. Kim's maternal half-sibling Kendall Jenner was seen getting around in a SLAYER tee, and EXODUS guitarist Gary Holt — who also played with SLAYER for nearly a decade — apparently responded by wearing a t-shirt onstage that read "Kill The Kardashians".

After Kanye was seen wearing a TESTAMENT t-shirt in 2016, the band's guitarist Alex Skolnick reacted negatively in an online post, writing: "Goodness gracious. This whole decrepit clan must have picked up a pile of old concert t-shirts (the same pile Kourtney K's SLAYER shirt came from) which have somehow become a 'thing' in trendy fashion (who'd have thought?!!). Inconceivable that any of these pop-culture vultures know who the heck any of the bands are. My guess is he thinks it's a religious group (not the first time that's happened). That is, if he thinks at all, which lately seems unlikely. And I thought this time period couldn't get any weirder..."

Barnes exited CANNIBAL CORPSE in 1995, one year after the release of the band's "The Bleeding" album. He has since been replaced by George "Corpsegrinder" Fisher. 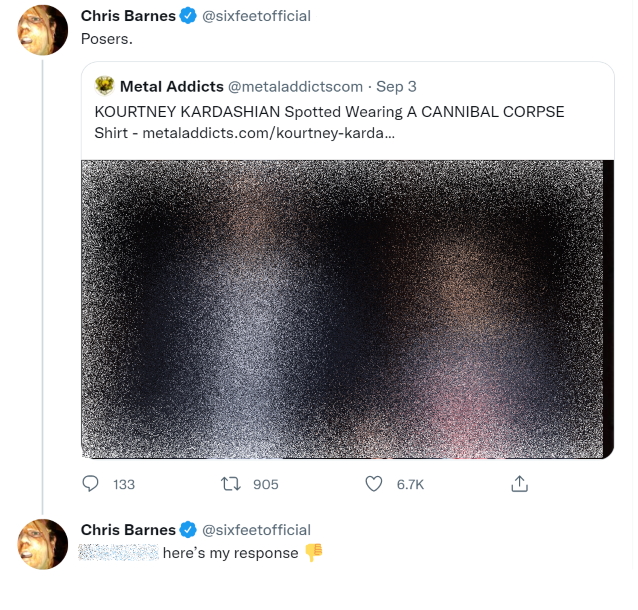