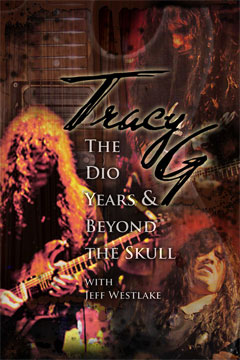 Former DIO guitarist Tracy "G" Grijalva is working on a book that will chronicle his time in DIO (from 1993 through 1999). In the book, titled "Tracy G: The Dio Years And Beyond The Skull", Tracy talks about everything — from how he got the gig and how he eventually left the band and what he has been up to since.

A promotional clip for the book can be seen below.

Tracy speaks very fondly of Ronnie James Dio, as noted in the following passage from the book.

"Behind the scenes and away from the reporters, cameras and industry people, Ronnie was very relaxed and calm," Tracy says. "[It was] very comfortable to be around him and he was very much a regular guy at those times."

Ronnie was always doing "cool" things like letting Tracy watch Dio's video library of film from the RAINBOW and BLACK SABBATH days, as well as inviting G's parents to the singer's house for a tour. Ronnie took the Grijalvas through the entire spotless house, which he kept cleaned all on his own. He told Tracy's parents that he once had a housekeeper but had to let her go because he kept the house cleaner than she did. Then they hit the room that Tracy was occupying and he told him that he was not in any way responsible for that room as it was Tracy's mess.

Tracy left DIO in 1999 after he claimed he was "asked to play in a dual-guitar situation" in Ronnie's band. According to a posting on Tracy's web site, DIO was "looking for more of a Ritchie Blackmore style . . . and wanted [Tracy] to step back and just play rhythm guitar. That's when [Tracy] knew it was time to leave, freeing him to more diligently pursue his home studio projects."

"Tracy G: The Dio Years And Beyond The Skull" is being co-written by HYDROGYN guitarist Jeff Westlake — described by Tracy as "a big DIO fan" — and will be available for shipping in late March from www.tracyg.com.

As previously reported, Grijalva has joined forces with current HYDROGYN vocalist Julie Westlake to record a collection of songs Tracy had written with Ronnie James Dio for the DIO releases "Strange Highways" and "Angry Machines" along with some of the guitarist's post-DIO material. The recordings are taking place at Tracy's G Factory studios and will include musicians that played on Grijalva's 2011 album, "Controlled Chaos" — Johnny B on drums and vocals and Eddie Frisco on bass. There is also talk of live shows taking place in the Los Angeles area this spring or summer.