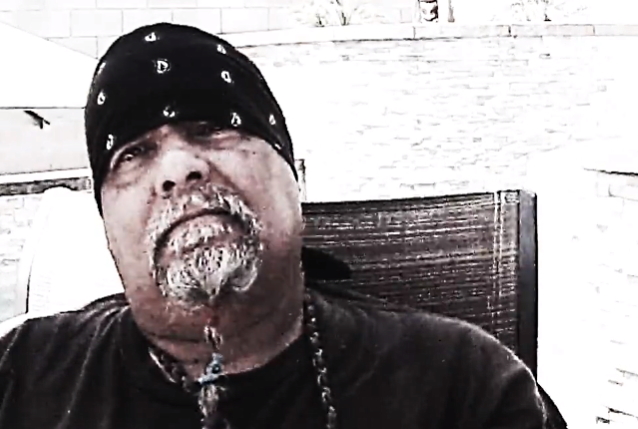 Grijalva, who played guitar for DIO from 1993 through 1999, was asked for his opinion of the Ronnie hologram during an appearance on the latest episode of the "80's Glam Metalcast".

He said (hear audio below): "I don't know about that, man. I just don't know about it. It looks creepy to me, 'cause it's not [Ronnie]. It looks like a puppet. It's cool to keep his music alive and all that jazz. What little I've seen, it looks weird to me, and I just don't know if he'd be a big fan of it. People say different things, and it's all hearsay. I knew the guy for six years, and what I knew about him, I can't see him looking at that and going, 'Bitching.'"

"It's just weird, man," Tracy continued. "And anyway, I'm not here to put down anybody, but… Craig Goldy doing all the guitars and Simon Wright doing all the drums… I love Simon Wright; he's a great AC/DC drummer. The drummer for DIO is Vinny [Appice] — he's the drummer that has the feel for DIO. Simon doesn't have the same feel. He's a great drummer, great guy. He'll probably even say the same thing — he doesn't have the same feel. No drummer has the same feel; all drummers play different. Vinny is one of the greatest — he plays meat and potatoes, but with a feel — he has the feel that's worth everything. Vinny is not just a metronome.

"I know they're playing along with Ronnie's voice, but the music's real stiff…. It's just, like, 'Oh, man.' It doesn't have that feel.

"I met the bass player guy that plays bass for that. He told me a couple of the tracks they do — I think 'Heaven And Hell' and 'Don't Talk To Strangers' or something — they stole from my era; meaning, they stole Ronnie's vocals from when I was playing with him," Tracy added. "And he's singing — the hologram is singing it — but then they're playing the song; they're following Ronnie. So, I was, like, 'That's pretty cool.' They thought out of everything that they listened to, that Ronnie sang 'Heaven And Hell' a thousand times, from the Dio-era BLACK SABBATH, they thought his best performance, a couple of those songs, was from my era, when I was playing with him. So that made me feel kind of good. I was, like, 'Well, that's cool.'

Grijalva is not the first former DIO guitarist to express his doubts about the Ronnie James Dio hologram. This past March, Doug Aldrich, who was in DIO between 2002 and 2006, told XS Rock: "I would see it if it was close by or if you had a good theater or something. I'd go see it to support the guys and and everything, but I can tell you that Ronnie would probably not like this. He would probably be, like, 'This is not what I signed up for.' A hologram? It's not really what he would want to be. I'm just guessing, you know, that it's something that [Ronnie's wife and manager] Wendy [Dio] thought about and she decided that Ronnie would be fine with it. But I knew Ronnie well enough to know that he was very particular and he would prefer for them to let him just die and be in peace."

After the tour's initial seven-date run was completed in December 2017, Ronnie's hologram underwent some changes before the launch of the first 2019 leg of the "Dio Returns", which kicked off on May 31 at the Barbara B. Mann Performing Arts Hall in Fort Myers, Florida and concluded on June 28 in Los Angeles, California.

Tracy left DIO in 1999 after he claimed he was "asked to play in a dual-guitar situation" in Ronnie's band. According to a posting on Tracy's web site, Dio was "looking for more of a Ritchie Blackmore style . . . and wanted [Tracy] to step back and just play rhythm guitar. That's when [Tracy] knew it was time to leave, freeing him to more diligently pursue his home studio projects."