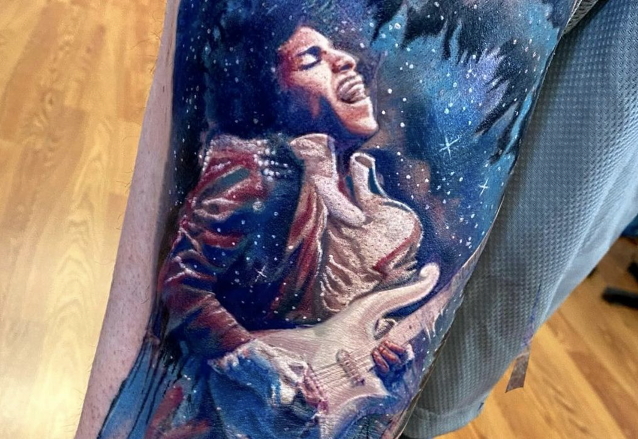 The 48-year-old musician, who currently fronts a new band called PSYCHOSEXUAL, apparently got the tattoo at Trip Ink in his hometown of Las Vegas.

On Monday (April 26),Spencer took to his Instagram to share a short video and a photo of the new leg ink, and he included the following message: "Got my new Prince tattoo finished today by the kick ass artist @damienwickhamtatt2 over at @tripinktattooco ! Thx! For doing an amazing job! #tripink #princetattoo".

In his PSYCHOSEXUAL project, Jeremy handles lead vocals as the Devil Daddy character.

Earlier this month, PSYCHOSEXUAL released the official music video for its latest single, "Devil From Hell". The song will appear on the band's forthcoming sophomore album, "Unholy Hymns For The Children", due out May 14.

Prior to the arrival of "Devil From Hell", PSYCHOSEXUAL's last release was the covers EP "Songs To Stalk You By", which came out last November. The EP reunited Spencer with former FIVE FINGER DEATH PUNCH guitarist Jason Hook, who contributed solos on the KISS classic "Watchin' You" and QUEENSRŸCHE's "Gonna Get Close To You". The recordings marked the first time the pair had worked together since both parted ways with FIVE FINGER DEATH PUNCH.