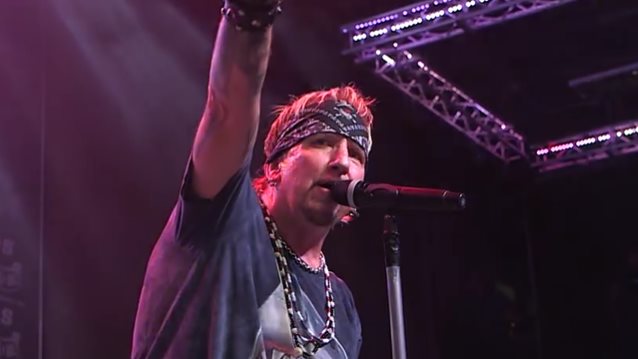 Ex-GREAT WHITE singer Jack Russell has slammed his former bandmates for the "deceitful" way his successor, Terry Ilous, was kicked out of the group.

On Saturday (July 21),Russell, who was himself fired from GREAT WHITE in December 2011 (after being on hiatus from the group since 2009),took to his Facebook page to offer his thoughts on Terry's departure from the band, writing: "Hello my friends, I just wanted to express my condolences to Terry Ilous for the deceitful way my X band members dealt with the situation of his termination kind of reminds me of something else. Huh? In the last few months Terry and I have gotten to know each other through Linkedin have become what I would say friends. As far as I'm concerned, he's a great guy and he had an opportunity and he took it. The fact is it was my fault that it all happened to begin with. I was unreliable, unhealthy and my addiction ruled my world. I wouldn't have wanted to play with me either if I were them. The only thing I was very upset about was the way they went about it. But at least Terry got an e-mail where I received nothing not even a phone call or a return message. But this is not about me this is about Terry. I'm sure he will find his way to a better place as he is a great singer and has a lot of talent and I have a lot of respect for him. I wish him well and I hope you will all support him in his future efforts. God bless you all, and as always keep the rock alive! It's up to you. All my love, Jack Russell."

In a recent interview with "The Five Count" radio show, Kendall said that he had "no animosity" toward Russell. "It just got to where he was so bad," he said. "He had to sit on stools. It got kind of bad and we just had to let him go get well. We told him, 'Just go get well.' He's got demons and all, so we just said, 'Get help.'

"I work with alcoholic addicts myself on a daily basis, so I'm real familiar with the range of what it takes for people to get sober," he continued. "One guy might just get a DUI and he quits drinking forever. Then you've got guys who lose everything, and they still don't stop, so it's a tough go. Some people make it.

"Anyway, yeah, we just told him to go get well and the next thing we know, he was suing us. I guess he wanted to just go grab random people and just play GREAT WHITE and take the band name. We had no choice but to defend ourselves. The final outcome was we kept the name and we gave him a way for him to make a living by making his name prominent but calling it 'JACK RUSSEL'S GREAT WHITE' or whatever. That's just the way it worked out. We've moved on.

"We just want to have fun and make music," Kendall added. "He's out playing now, too, I think and so, he has our blessing, and everything is great. It's like a marriage. He just got into a rough spot and couldn't get out, and then the next thing we knew, we were served papers. So, I don't know what to say about it apart from that. I never take it personal when somebody's in trouble with demons or whatever. I know it's not personal. They're not doing it to hurt anybody; some people just can't get out of that life. I hope he's doing good today and that's that."

Hello my friends, I just wanted to express my condolences to Terry Ilous for the deceitful way my X band members dealt...