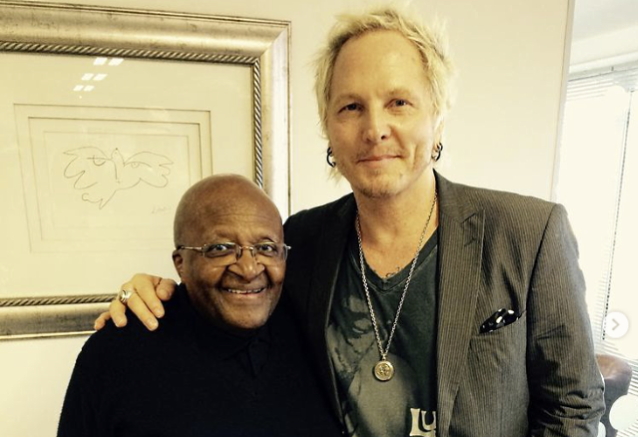 Former GUNS N' ROSES drummer Matt Sorum is mourning the death of Archbishop Desmond Tutu, the human rights crusader who died in South Africa at the age of 90. He had reportedly been in ill health for years.

On Sunday (December 26),Sorum took to his Instagram to write: "Very Sad to hear of the passing of Archbishop Desmond Tutu, I had the honor of meeting him while on tour in South Africa with KINGS OF CHAOS in 2014. I received a call from a friend asking if we'd like to meet him for tea. Steven Tyler, Duff [McKagan], Billy Gibbons and Nuno Bettencourt along with our wives headed to his office walking through the Cape Town marina near The Nelson Mandela gate. We were greeted by his lovely staff and Archbishop Tutu. We sat with him for around 1 hour while he filled us with positive and uplifting hope for the future of Africa and the world. He was highly intelligent with a gentle tone . It was a spiritual experience being so close to a man who has dedicated his life to helping the oppressed especially during Apartheid when he was an instrumental figure along with Mandela. It was a day I will never forget and so glad I was able to be in the presence of such a great man. #rip @desmondtutu".

In a statement confirming Tutu's death on Sunday, South African President Cyril Ramaphosa expressed his condolences to Tutu's family and friends, calling him "a patriot without equal."

"A man of extraordinary intellect, integrity and invincibility against the forces of apartheid, he was also tender and vulnerable in his compassion for those who had suffered oppression, injustice and violence under apartheid, and oppressed and downtrodden people around the world," Ramaphosa said.

One of South Africa's most well-known human rights activists, Tutu won the 1984 Nobel Peace Prize for his efforts in resolving and ending apartheid. An outspoken critic of apartheid, he also supported the economic boycott of South Africa, while constantly encouraging reconciliation between various factions associated with apartheid. When Nelson Mandela was elected as the nation's first black president, he appointed Tutu chairperson of the Truth & Reconciliation Commission.

Tutu has won a number of other awards, including the Pacem in Terris Award, the Bishop John T. Walker Distinguished Humanitarian Service Award, the Lincoln Leadership Prize and the Gandhi Peace Prize.

President Biden and first lady Jill Biden said they were "heartbroken" to hear that Tutu had died.

"His courage and moral clarity helped inspire our commitment to change American policy toward the repressive Apartheid regime in South Africa," the Bidens said in a statement.