Former GUNS N' ROSES drummer Steven Adler was the featured guest on the nationally syndicated "Loveline" radio show this past Tuesday night (October 28) with hosts Stryker and Dr. Drew Pinsky. Photos of Adler's appearance on the program can be found on his MySpace page (free registration required to view pictures).

Steven Adler is featured in the second season of the VH1 hit reality series "Celebrity Rehab with Dr. Drew", which premiered on October 23. According to RollingStone.com, the first of eight episodes saw Adler sobbing about how his friendship with Slash has deteriorated to the point where the guitarist didn't ring him up to drum on his upcoming solo LP, sucking down bong hits while proclaiming his desire to die, and declaring his admiration for "Grease" star Jeff Conaway. Defamer has posted a video excerpt (which can also be seen below) from the episode where we meet the former GUNS N' ROSES drummer in the living room of a small, sparsely furnished home with smashed-in (by Adler) front windows, moaning that he wants to die. Things then proceed to go downhill from there. Try not to wince as you hear him recount the time he ingested 100 Valiums, a bottle of Jägermeister, and heroin in an attempt at killing himself, but only managed to achieve a stroke and paralysis.

Similar to the first cycle, the second season of "Celebrity Rehab with Dr. Drew" follows the real-life experiences of celebrity patients undergoing detoxification and treatment at a center in the Los Angeles area. The show follows Jeff Conaway as he checks back into rehab after a series of back surgeries, setbacks and subsequent reliance on pain medications. Joining him in rehab are Sean Stewart ("Sons of Hollywood"), Amber Smith (model/actress), Rodney King, Nikki McKibbon ("American Idol"), Steven Adler (GUNS N' ROSES) and Tawny Kitaen (actress, David Coverdale's ex-wife). Gary Busey, who is 13 years sober from his cocaine addiction, is also joining the cast to take the journey with the others and to share his experiences on the recovery process.

The series chronicles the patients' intensive 21-day program with both group and one-on-one therapy and non-traditional therapies like art and music. Returning to the show to help Dr. Drew Pinsky are drug counselor Bob Forrest and resident technician Shelly Sprague who have each spent years on both sides of the rehab fence. Dr. Drew is also bringing in some additional prominent physicians to help him give the patients supplementary one-on-one care. The patients' families will also be more involved with their recovery programs and, in some cases, will receive treatment themselves. After they completed the program, the patients will be strongly encouraged to continue their treatment in a sober living facility or treatment center for at least three months at VH1's expense.

Dr. Drew is a highly respected practicing MD and assistant clinical professor at KECK USC School of Medicine, who once again gives viewers an unflinching look at exactly how the rehab process works and what it feels like for participants. Dr. Drew hopes to use his celebrity patients to humanize the process and show viewers that treatment is a viable way to break the cycle of addiction.

While most people know Dr. Drew as the host of the syndicated radio show "Loveline" and the MTV show of the same name, Dr. Drew is a medical doctor on staff at Huntington Hospital, a board certified addictionologist and service director of the Chemical Dependency Program/Residential Treatment Center, where he has been treating addicts for over 20 years. Although he is an associate professor of clinical psychiatry at the KECK USC School of Medicine, he is not a psychologist or psychiatrist. His book, "Cracked: Putting Broken Lives Together Again" (Harper-Collins) is all about what treating addicts is like from a caretaker's perspective. Dr. Drew co-authored the first academic study on celebrities and narcissism. The study was published in the Journal of Research in Personality (Elsevier) in September 2006, and is the first systematic, empirical scholarly study of celebrity personality. Dr. Drew can also be heard during the day Monday through Friday on the nationally syndicated radio show "Dr. Drew Live". 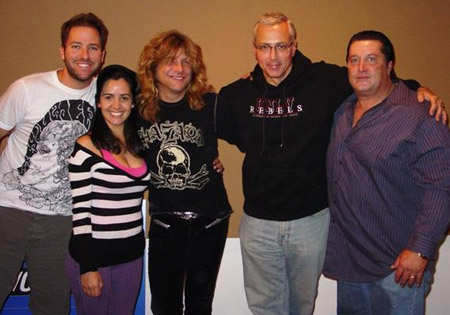