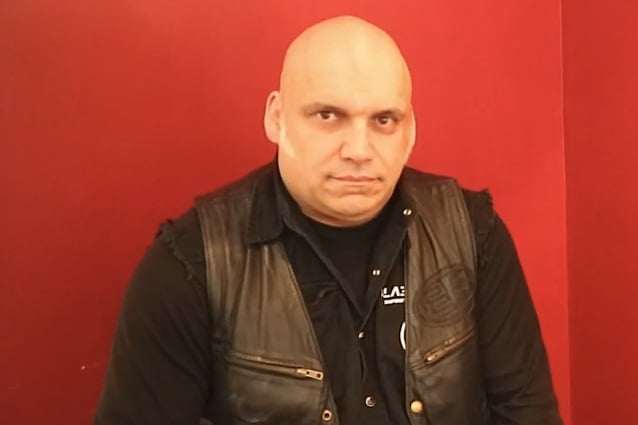 Hayley Leggs of Total Rock Radio conducted an interview with British heavy metal vocalist Blaze Bayley (IRON MAIDEN, WOLFSBANE) at this year's edition of Hammerfest, which was held this past weekend in Pwllheli, Wales, United Kingdom. You can now watch the chat below. A couple of excerpts follow (transcribed by BLABBERMOUTH.NET).

On the supportive comments made by IRON MAIDEN singer Bruce Dickinson about Blaze's time in the band:

Blaze: "I've known Bruce a long, long time. And before [I joined] IRON MAIDEN, we were in New York with WOLFSBANE doing a gig, and Bruce turned up and Bruce bought us a beer and we kind of kept in touch. And when I was in MAIDEN, Bruce was very supportive, and after [I was in] MAIDEN, Bruce was very supportive of my solo career. And he really supported me on the last album, because I wanted to make a video, 'cause the song is called 'Escape Velocity' and the chorus is 'I will fly.' And I said, 'You know, it would be great if we could use a flight simulator. And who do I know? Hmmm.' And I got in touch with Bruce, and he let me use one of the flight simulators at his company. I mean, this would cost a fortune if you had to buy it, and he let me use that all day and film our video for my song 'Escape Velocity'. It was incredible. It was fantastic. [He was] very supportive. Whenever we're in a room together, we say hi. There's a moment and a look between us, and I think it's an unspoken thing that we just connect and go, 'There's the other person that knows how difficult it is to be the singer of IRON MAIDEN.' [Laughs]"

On the challenges of being embraced by MAIDEN fans as the replacement for Dickinson:

Blaze: "Really, my voice is so different to Bruce. I mean, he's a legendary, hallmark voice of heavy metal vocal, and my voice is very, very different. And I think perhaps that MAIDEN really wanted a change, that they wanted a different voice at that time with those albums, 'The X Factor' [1995] and 'Virtual XI' [1998], that I was on. And it was the start of the progressive era of IRON MAIDEN that we're familiar with now, with the longer songs and bigger production and everything. So I feel that I was there at an important time in the MAIDEN story, though it may not have been popular with all the fans, and there's still plenty of MAIDEN fans that hate me. It's an interesting time. And now, 'The X Factor' and 'Virtual XI' albums have been brought out on vinyl and they're remastered, and those remastered vinyl versions are much stronger-sounding than the original CD versions. It's a very small audience, and but it is a small amount of fans that are becoming interested in me on the back of that vinyl re-release."

On the songwriting lessons he learned as a member of IRON MAIDEN:

Blaze: "I have to give credit, really, when I was in MAIDEN working with [MAIDEN bassist] Steve Harris. He taught me so much about songwriting, and he helped me find this extra part of my voice, which is a huge part of my sound now. And I think the most incredible thing was when you're there with Steve and you can see the idea from his head, going into the rehearsal room and then going on to the album, it's a real lesson. And it was just great to learn that. And so on my 'Infinite Entanglement' trilogy, there is a heavy influence of that kind of mentor relationship where I learned so much when I was writing 'Futureal' and 'Virus' and 'Man On The Edge' with Steve and the rest of the guys, I learned so much from that, and I think that is why I was able to have the confidence to say, 'This isn't just one album. This is three albums and it's one story that goes over these three albums.'"

The third album in Blaze's "Infinite Entanglement" trilogy was released on March 2. Titled "The Redemption Of William Black", it is the highly anticipated third part of the trilogy, bringing the sci-fi concept to a conclusion.

"The Redemption Of William Black" is the tenth album of Blaze's solo career.