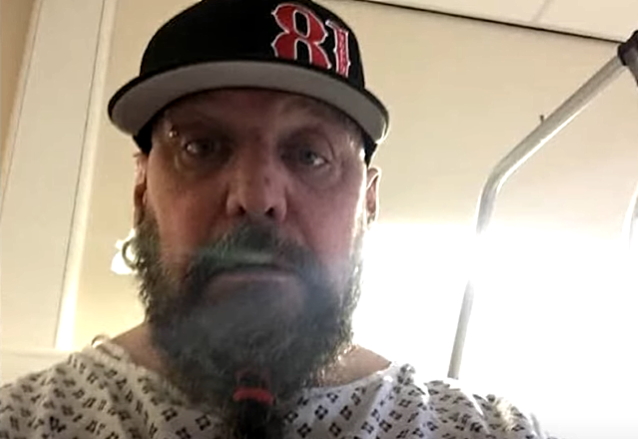 Former IRON MAIDEN singer Paul Di'Anno, who has been receiving lymphatic drainage treatments in Zagreb, Croatia in preparation for his upcoming knee surgery, spoke to the "Još Jedan" podcast about his health condition, relationship with the fans, depression and how it affected his songwriting process. He also discussed his time in IRON MAIDEN, BATTLEZONE and ARCHITECTS OF CHAOZ, and his upcoming free concert in Zagreb, which will take place one day before IRON MAIDEN's show in Croatia in May.

Speaking about his health, Di'Anno said (as transcribed by BLABBERMOUTH.NET) that he is doing "better" but noted that he still "a lot of work to do — a lot of physio and stuff like that."

Pergjoni, who has been behind Cart & Horses since 2016, leasing the pub from the building's owners who are converting the beer garden and car park into flats, discussed his fundraising efforts during a 2020 appearance on the "Uncle Steve's Iron Maiden Zone" podcast. Asked if he has approached the members of IRON MAIDEN themselves to contribute in some way to the Di'Anno campaign, Kastro said: "Myself, no, I haven't, to be honest, because I don't wanna put things… What's the best way to say it now? It's not up to me to go to them, because I have no connections with IRON MAIDEN themselves. Even when I [need to approach] Steve [Harris, IRON MAIDEN bassist and founder], I go through his friends or his sister sometimes or close friends that he's got to get stuff from him. But to go to MAIDEN for something that is related to MAIDEN, I don't think that it is me personally, or Cart & Horses, the ones to contact them. I'd love if they come forward and just cover whatever is left or say whatever, but I don't think it's down to me to go to MAIDEN. Because [Paul's] got friends and he's got connections with MAIDEN more than I have, so if MAIDEN wanted to, or if somebody else wanted to, they would have done it. But so far, nothing, unfortunately, no."