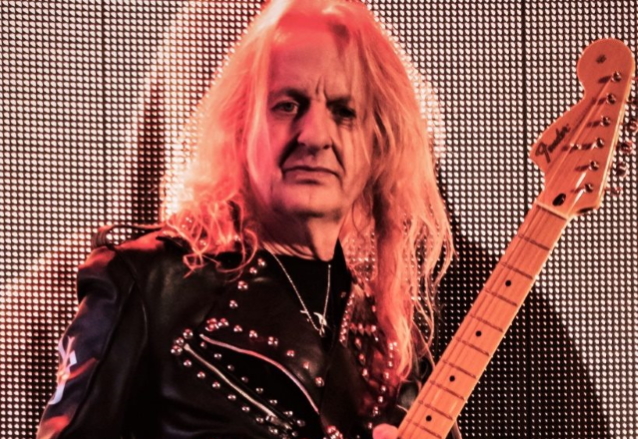 "I would have to say I appreciate the mighty IRON MAIDEN because, obviously, being British — JUDAS PRIEST, IRON MAIDEN, BLACK SABBATH, SAXON, whatever," he said (as transcribed by BLABBERMOUTH.NET). "And when you think about it, there's really not enough — there should have been a lot more coming through on the back of those bands. So maybe that time will come.

"You always hear about the New Wave Of British Heavy Metal, which apparently IRON MAIDEN and SAXON and DEF LEPPARD were, but we don't have the 'New New' wave," he continued. "We had the one wave… We may have been the first, let's say; the second, those guys; but where is the third [wave]?

"But, yeah, congratulations to those guys for being ginormous, and, obviously, I have total respect. But I must commend those guys for their work ethic. Boy, they just go round and round the world. Where do they get their energy from?"

When host Joshua Toomey suggested to Downing that he had at times come across as a little bit jealous of MAIDEN's success in his 2018 autobiography, "Heavy Duty: Days And Nights In Judas Priest", K.K. said: "I have to say that IRON MAIDEN got an awful lot of things right where we got some things not so right, I guess. But I'm still immensely proud of the success we had and what we did. I mean, just things like we were fairly eclectic, really, with albums — we would kind of do some new turns and stuff. Because we always felt, in the early days, it was our duty to widen the spectrum of the fanbase for metal. Because we could do songs like, for example, 'Blood Red Skies' or 'Living After Midnight'… And there's an awful lot in between. So we were always, not exactly experimenting but just pushing the boundaries maybe a little bit too far sometimes — maybe — for some of the fans. And so we had a fan divide where some fans liked thisJUDAS PRIEST and some fans liked thisJUDAS PRIEST — the darker side of the more rock side. Because in the early days, bands like us couldn't get gigs; we couldn't get record contracts, we couldn't get gigs. So we had to be more flexible with our material. I think when bands like IRON MAIDEN came along, they kind of knew their direction and kept it there. And that element of consistency as well, with bands like the mighty AC/DC and various bands, that works really, really well. And also the consistency of just going out year after year as well and working really, really hard. I mean, we did when we did two studio albums in one year — in '79 or something like that. And we did an awful lot of touring."

Three years ago, Downing opened up about the contentious rivalry that developed between PRIEST and MAIDEN when the two bands toured together in the early 1980s. He told SiriusXM's Eddie Trunk: "We'd just finished the 'British Steel' record in England, and we were going out on tour [in early 1980 with IRON MAIDEN]. And then the next thing I know, I read in a music paper that [IRON MAIDEN said] something like, 'Yeah, we're gonna blow the bollocks off PRIEST,' or something like that. And I went, 'What the hell is this shit?' We were still in the recording studio, tidying up the last mixes or something. And I said, 'Well, who are these guys?' Why should we have [them] on tour if they're gonna create this type of vibe before we've even met them, let alone done a show together?' I said, 'Let's get rid of them and get somebody that really appreciates the gig' [laughs], of which there would have been an awful lot of bands. But anyway, everybody talked me into going with it, and I said, 'Well, fine,' obviously being democratic. And the next thing I know, we were at the rehearsals at some theater in London somewhere, and this bunch of guys walked in and just sat down in front of me. And I said to my guitar tech, 'Who are those dudes there?' [Laughs] And he went, 'Oh, that's the support band.' And I said, 'Well, who the hell invited them into our rehearsal?' I was thinking about what I read in the papers. And I said, 'Well, just go and tell them that they weren't invited and they need to leave.' I didn't see an invite; nobody told me they were coming in — when you're trying to work out songs and this and that and the other. So that's what happened."

"Sermons Of The Sinner" will be released on August 20 via Explorer1 Music Group/EX1 Records. The LP's first single, "Hellfire Thunderbolt", came out last month, followed by the title track earlier this week.