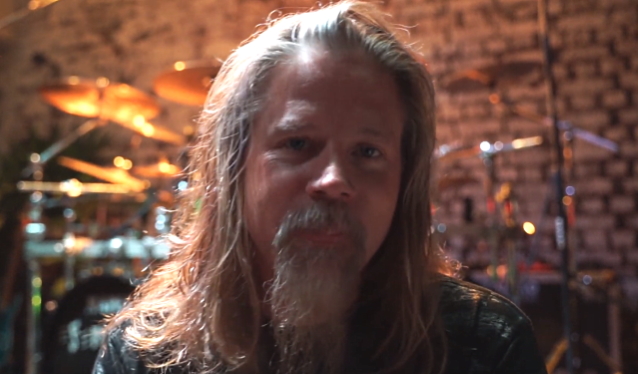 Furtados Music conducted an interview with Chris Adler in November when the former LAMB OF GOD drummer traveled to India to conduct a series of drum and music-business clinics and live shows titled "The Chris Adler Experience", presented by Gravity Talent. The live shows saw Adler supported by a number of the country's top musicians as they belted out the best-known LAMB OF GOD and MEGADETH material.

Asked what projects he has lined up for 2020, Chris said (see video below): "Well, we'll see. I've got a couple of projects going on. There's a guy in California named Myrone that I'm working with. He just put out an album called 'Guitar Magic'. He's kind of one of these virtuoso guys. I'm looking forward to doing something with him. And probably another clinic run in South America; maybe something in the U.S. as well. And I'm also gonna be getting married, so I'm trying to find a good place to do that. And India seems like a great place. We've been talking about it, actually… Other than that, probably just take a little time. My daughter's gonna be 12, and I missed 10 birthdays, eight in a row. So I think it's probably time for me to show up."

When the interviewer said that being a musician is a "tough job," Adler responded: "It is — well, especially with kids. And so, that kind of guilt is starting to get to me a little bit. I wanna be home [for her next birthday]."

In 2018, Adler launched a management agency, Kintsugi Management. Less than a year old, the company currently works with two bands: BETRAYING THE MARTYRS from France and DYSCARNATE from the U.K.