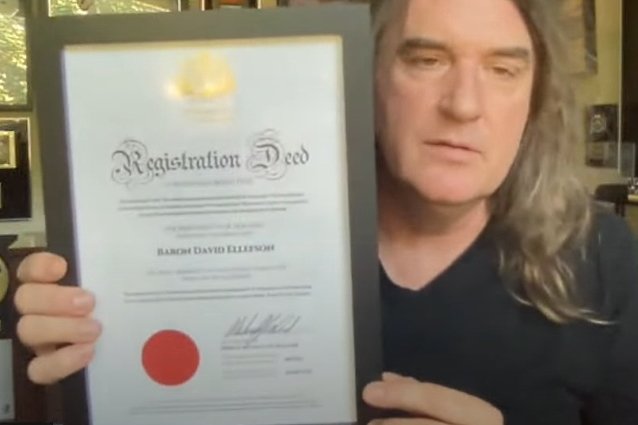 Former MEGADETH bassist David Ellefson says that he was recently given the title of baron by Sealand — described as the smallest independent state in the world.

Sealand is a WWII defense platform off the coast of Britain, consisting of a large steel deck sitting atop two concrete towers. It was seized and proclaimed a nation by a pirate broadcaster named Roy Bates in 1967. His grandson Liam Bates currently holds the title of Prince Of Sealand.

To fund Sealand's operational costs — including two full-time security personnel who live on the micronation year-round — Sealand's online store sells t-shirts, stamps and royal titles. A lord, lady, baron or baroness peerage costs $44.99. To receive the title of sir or dame, you will need to cough up $129.99.

Ellefson discussed his Sealand lordship in a new interview with Drew Stone of The New York Hardcore Chronicles Live! he said (as transcribed by BLABBERMOUTH.NET): "Drew [Fortier, musician, filmmaker and actor], one day we were talking, and I was talking about castles across Europe. And he said, 'Dude, you can go to Sealand' — look it up online — 'you can buy like a square foot of land of Sealand.' So I became a lord, 'cause that's what a landowner is, is a lord. And then I upgraded to becoming a baron. And then I even paid another couple of hundred bucks and became a sir. So now I'm Sir Lord Baron David Ellefson, the royal and noble title of the royal family. So I [paid] a few hundred bucks and became a sir as opposed to Paul McCartney and Elton John; they have to pay — I don't know — a million pounds to the Queen or something to become a sir. So you can refer to me now as award-winning [film] producer Sir David Ellefson."

Ellefson was fired from MEGADETH earlier this year after sexually tinged messages and explicit video footage involving the bassist were posted on Twitter.