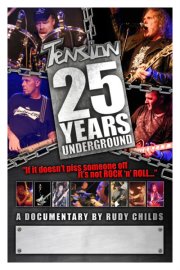 There is nothing more exciting than being on the threshold of a new type of music. "Tension: 25 Years Underground", a documentary by Rudy Childs, takes us back to 1978 when teenagers Tom Gattis and Marty Friedman (later of HAWAII and MEGADETH) met and formed the rock band DEUCE (later known as TENSION). These kids churned out a style of music that underwent a complete metamorphosis — growing from punk-inspired rock 'n' roll, into classic heavy metal at a time when that genre of music was way under the radar of most rock fans.

"Tension: 25 Years Underground" takes us through the entire decade of the band's existence, beginning as teenagers practicing in their legendary rehearsal space "The Barn," through securing a record deal, and on to their unfortunate demise in 1988. Interwoven throughout the band's storyline are sidebars touching on rock culture, music and censorship, topics important to the band during their tenure. Painstakingly constructed from new interviews, music and vintage concert footage, this film reveals the engrossing story of an innovative band that simply existed in the wrong place at the wrong time.

Despite their trials and tribulations, TENSION's members have achieved success in their own personal ways, which have become rewarding in itself. With this film, their musical legacy lives on — in fact, they have reunited to open for ANVIL and ARCH/MATHEOS at the sold-out Keep It True festival in Germany (their first gig abroad) in April 2012.

"Tension: 25 Years Underground" will receive its world premiere on the opening night of the Neon Reverb Music & Arts Festival on March 20 in Las Vegas, Nevada. More information is available at this location.

A trailer for "Tension: 25 Years Underground" can be seen below.

In a 2003 interview, Friedman stated about DEUCE, "DEUCE was me and my friends back in Washington D.C. The only member that any of you may know is Tom Gattis, who went on to sing and play guitar in TENSION and WARDOG. He also did a KISS compilation album with me. He is one of my best friends in the world. We were the core of DEUCE. We were kind of punk, kind of rock and roll, but at the same time we loved tricky little guitar parts. All the band members were between 14 and 17, but we had a huge fan base in our area, mainly beacuse we put on a show every night at our rehearsals. We never really rehearsed, we just made our 'practices' a 'concert' and a big party for everyone. We all learned a lot from that." He added, "I quit DEUCE because my father got transferred to Hawaii and I had to move."