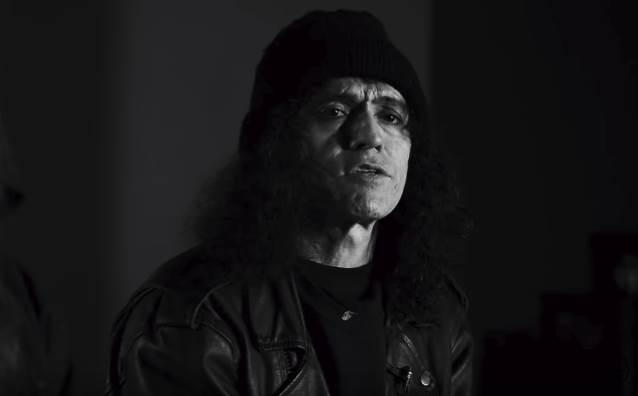 Drumtalk, the video podcast by German drummer and videographer Philipp Koch, conducted an interview with former MORBID ANGEL and current TERRORIZER drummer Pedro "Pete" Sandoval and MONSTROSITY drummer and TERRORIZER guitaristLee Harrison. You can watch the entire chat below. A few excerpts follow (transcribed by BLABBERMOUTH.NET).

Pete: "I love drumming for the speed and you know, drums are the backbone of the music. The foundation. I've been into this style of music that I've been playing for — you guys know since when — that's why I love it because it's challenging. Back in those days, there was no death metal. I didn't know death metal; I only knew hardcore, the hardest bands were like MASTER, REPULSION and I guess NAPALM DEATH was around, too, but I didn't hear from them until we had the 'World Downfall' album. It was natural for me, to be honest, before back in '85, '84, sometime in '84 or '85, I tried to play guitar. I even have some pictures from back then when I'm just trying to be a guitar player, but it didn't work for me after a few months. Then, I started to realize that drums were the thing. Every time I hear it, even if I heard bands like JUDAS PRIEST, let's say, VAN HALEN, you know, it was the drums that I felt. I just decided, 'Hey, I want it.' It came to me like 'I want to play drums.' You know, I would practice without drums, of course, in my house, on the chair, pillows, I used to put a pillow and just pretend like I'm playing, so everything was by ear. I never learned how to play drums. I didn't go to school, I didn't have a teacher. I taught myself and eventually, after I knew that the drums were my thing, I was already seeking for new bands that were more heavy, more extreme than the previous bands. Then, I found HELLHAMMER back in those days, 'Sentence Of Death', DESTRUCTION, that was 'Wow!' [METALLICA's] 'Kill 'Em All', that album, is history for me, [SLAYER's] 'Show No Mercy', of course. When I heard this kind of thrash, I went 'No, no, no. I love this. I love speed.' Speed was natural for me. I learned the skank beat which was popular back then, the SLAYER beat, then I thought, 'Hey, I want to do double the speed.' But remember, I never played double-bass before I joined MORBID ANGEL. It was only one kick-drum. It was one-footed blast beats, that's why they call me [the inventor] of one-footed blast-beats. This is how I felt. I felt I wanted to double the speed. That's how everything started. Speed. I just wanted to make things faster, somehow. There was not this kind of music in '86. Come on. That was when I started with TERRORIZER. '87, we made some demos. So, that was the beginning for me. I wanted to take things to the next level as far as speed. That was the logical way."

Pete: "Some bands they traveled and moved to Florida. It's not because it's the death metal [capital] of the world, it's because Florida has a nice climate, has a nice temperature. Most people love Florida because it's called the 'Sunshine State.' There's only probably two or three months out of the year where it gets cold. Then it's nice, warm. I mean, come on, so, that's one reason I think a lot of bands liked to move there. I didn't live in Florida. I was in California and L.A. and TERRORIZER. We had demos. '87 I was there, then '88, I get a call from MORBID and 'blah, blah blah.' I moved to Florida and MORBID wasn't actually from Florida, either. Trey [Azagthoth, guitar] was from Florida, I guess. Trey, he started the band with Mike Browning and Richard Brunelle, but they and the drummer Wayne [Hartsell], the band moved down there. That makes it interesting for other bands who [think], 'That's the death metal capital of the world.' A lot of things have to do its beaches, nice beaches."

Lee: "A lot had to do with Morrisound [Recording] because everyone wanted to record there."

Pete: "That's why Morrisound got so popular. That's the way it is, man."

Pete: "First of all, it was recorded in Morrisound Studios. One of the greatest studios for back in those days for recording. 'Covenant', also the producer, we had some guy flown from Europe, his name is Flemming [Rasmussen]. He worked with us on the sound in the studio and by 'Covenant', we were a little more together, more grown-up, more tied together, like a family. Then 'Covenant' was born. It is the way it is. It was a letter C, it had to be a C, it is not the D or the B, so therefore, yeah, 'Covenant' is one of my favorite albums, definitely. So is 'Formulas [Fatal To The Flesh]'. 'Formulas' was the comeback. 'Heretic' was also pretty cool. It's got some cool ideas there. And the classic ones, which most people like and love, 'Altars [Of Madness]' and 'Blessed Are The Sick'. But 'Covenant' was a mixture of a great producer, great album and we wrote some killer music for that album."

On what inspires him:

Pete: "What gives me hope is that I am more of a positive-thinking guy nowadays and I feel I'm like I'm getting old on the outside, but when I play, I feel like 20 years younger. So, it's like, I don't need no hope; I am the hope. I am making things happen. When you are on the positive side and you deal with positive things in your life, then positive things come into your life and that becomes good. But, when you're dealing on the negative side, the negative things come to your life. It's not me. So, like most people, I believe in God. I believe that he's my helper and why am I back? Well, I wanted to come back because I wasn't going to give up just sitting. No way, that's not me. I'm not a quitter. But, I believe with God, I feel more powerful. I have more life. New life. More energy, like I have been born again. Come on. This feels like when we did the 'Blessed Are The Sick' tour, my body, it's fine. So, positive things come to you. Negative things come to you. It's up to the individual, man."

TERRORIZER recently signed with The End Records for the release of its long-awaited third album, "Caustic Attack". Produced by Jason Suecof (DEICIDE, ALL THAT REMAINS, KATAKLYSM, BATTLECROSS) at Audiohammer Studios in Sanford, Florida and featuring the apocalyptic cover art of Timbul Cahyono (ROTTING CORPSE, PYREXIA), the record serves as the band's first studio offering in six years.

After being originally sidelined with a back injury prior to the recording of MORBID ANGEL's controversial 2011 album "Illud Divinum Insanus", Sandoval left the band for good in 2013.