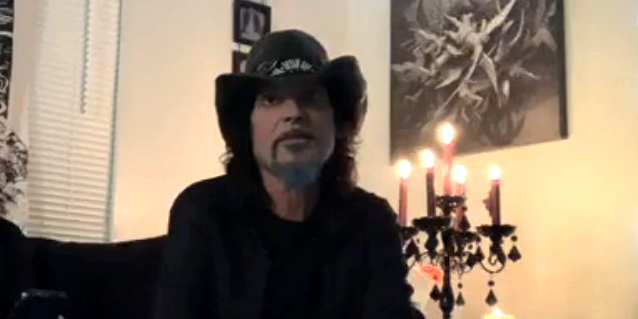 Dane died in December 2017 in São Paulo, Brazil at the age of 56. The musician reportedly had a heart attack during the night and could not be revived. At the time of his death, Warrel was recording his posthumously released solo album "Shadow Work".

On December 13 2019 — the second anniversary of Dane's passing — Sheppard officially launched THE DEAD HEART COLLECTIVE by releasing the first samples of his newly written music and taking part in a Facebook Live chat in which he talked about and shared memories of Warrel. Sheppard has also sent his synopsis of THE DEAD HEART COLLECTIVE to BLABBERMOUTH.NET in which he explained his decision to start a new project as a vehicle for Warrel to "channel songs and paintings" through him.

James wrote: "Hello my name is James Sheppard. Some of you may know me from the prolific underground metal bands SANCTUARY and NEVERMORE.

"Warrel Dane and I spent several years together giving our music to the world, and we were blessed to work with such great such musical talents as Lenny Rutledge (SANCTUARY) and, of course, Jeff Loomis (NEVERMORE), one of the most brilliant guitarists and songwriters ever. Without them, none of this would be possible, so i just want to say a heartfelt 'thank you' at the onset of this new journey I have departed on.

"Where do I begin? [In] 1984, when I met Warrel, we immediately recognized each other as soulmates. After three decades of loving each other, music and fine cuisine, we were given the amazing gift of owning an Italian restaurant together. We traveled all over this cold blue orb and absolutely rocked millions of devoted fans. When we returned from touring, we served them some of the best Italian dishes in Seattle.

"Life has been amazing. Then it caught on fire.

"At my house, I had my guitar parked in my living room like some kind of cathartic display. Late one night in February of [2018], I felt a familiar hand on my back and it pushed into my retired guitar. I immediately picked it up the guitar and wrote the first song for DHC by the next morning. As dawn arrived, it dawned on me that this was how we always had communicated best, through the connection of music, and this is how we will communicate while torn between dimensions. Being soulmates, a window opened up to the other side and we started talking again but in a different language. WD started to channel more songs and paintings through me that I now refer to as 'THE DEAD HEART COLLECTIVE.' I opened my soul to this new strange new world.

"To the skeptic: Keep in mind while looking and listening that I've never painted anything before other than my house. As a bassist, I wrote bass lines for my bands. I have not played a six-string guitar since I was a teenager. But here I am suddenly finding myself as a singer, songwriter and painter/artist, all through WD's inspiration. WD has given me his blessing to offer our secret world to you in this new Magickal format. Every song is attached to and illustrated by a painting. They come with an added commentary on the connection and the process of this otherworldly art.

"Please join us weekly on our podcast, where I will spill all the dirt on life with WD, NEVERMORE, SANCTUARY and whatever I choose to talk about. Please join the mailing list, and leave your comments and questions. I look forward to hearing from you.

NEVERMORE effectively split up in 2011 when Jeff Loomis and drummer Van Williams announced their departure from the band due to personal differences with Dane and Sheppard. Warrel later described NEVERMORE in an interview as "the greatest band that alcohol ever ruined."

SANCTUARY, which reformed in 2010 after an 18-year break, has spent recent years touring in support of its comeback album, 2014's "The Year The Sun Died", as well as 2016's "Inception", an album comprised of presumed lost 1986 studio recordings. The band is currently fronted by Joseph Michael, who is also the singer for WITHERFALL.