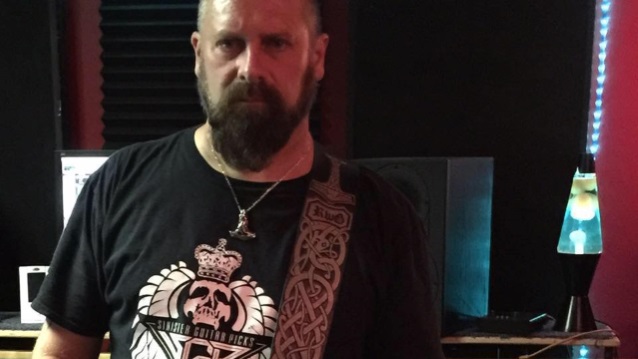 Former OVERKILL guitarist Bobby Gustafson says that fans shouldn't buy the band's upcoming "Live In Overhausen" DVD and Blu-Ray because he is "not getting a dime" from the release.

Due on May 18 via Nuclear Blast, "Live In Overhausen" was recorded two years earlier in Oberhausen, Germany, where OVERKILL celebrated the 25th anniversary of "Horrorscope" and 30th anniversary of "Feel The Fire" by performing both albums in their entirety.

After Nuclear Blast announced the details of "Live In Overhausen" in a press release on Friday (March 16),Gustafson took to his personal Facebook page to slam his former bandmates, once again accusing them of not giving him his rightful share of OVERKILL's royalties for the songs that he was part of creating and recording.

Bobby posted the "Live In Overhausen" cover image and wrote in an accompanying note: "What are they celebrating: The fact that none of the other members even played on these albums. The fact that they will both make all the money" — apparently referring to Verni and vocalist Bobby "Blitz" Ellsworth — "and not the other three or the fact that they think they don't have to pay me. Don't buy this piece of shit, people. I'm not getting a dime."

Gustafson previously told Metal Rules that he was never officially asked to leave OVERKILL. "It wasn't something where they came out and said, 'Hey, you're fired!' It was more of a verbal fight between me and D.D. about doing a show where they wanted to do it strictly for money and I didn't want to do it because we had just sold out Studio 54 in New York, our biggest show, and they wanted to do a Halloween show that was kind of goofy," he claimed.

In a 2016 interview with Rock & Metal In My Blood, Gustafson said that he would "never play with [OVERKILL] again. They stole from me back then and continue to steal from me till this day," he explained. "They haven't paid me for the use of my songs for the past 30 years and now they are even re-recording 'Feel The Fire' live. I've never seen a band claim so adamantly that they don't live in the past, yet most of their set list is from the first four albums I was on. They have had so many albums after me and never play songs from them. I just can't play happily with backstabbers and liars."

Regarding the fact that OVERKILL replaced him with two guitarists, Gustafson told Noisecreep in a 2011 interview: "Some might say it was like a compliment. I would tend to agree. Plus every album after me, when they had two guitar players in the lineup, never topped what I did. 'The Years Of Decay' is still our best-selling album and I had a really short time to write it. I did it short breaks within a six-month period. D.D. had years to put together their next album ['Horrorscope']. So his opinion that two guitarists would make them heavier failed."

Ellsworth told Invisible Oranges that OVERKILL's decision to replace Gustafson with two guitarists was primarily due to the fact that the group wanted to do something different. "Bobby left the band, and it wasn't the most amicable circumstances," he explained. "There are different stories about what happened, but I wanted to play with D.D. We started the band and I trusted his ethic and songwriting. We knew if we replaced Bobby with one guitarist, we'd get compared to what we were. So, it seemed like to logical thing to bring in two players. We didn't want anyone to say, 'Bobby was better than this new guy.' And we wanted to perform old stuff with two guitars to keep in fresh. We realized that change isn't a bad thing."

Gustafson is involved in a new band called SATANS TAINT, which released its latest album, "Axe To The Head Of My Enemies", last year.