OVER THE RAINBOW is:

Carey, who has produced several artists (including Joe Cocker and David Knopfler) since his RAINBOW days, says, "Having done everything from country to opera, I thought it would be fun to play some rock again without the burden of singing everything."

Rondinelli adds, "OVER THE RAINBOW reunites members of one of the most distinctive sounding bands of all time and introduces a hidden treasure to the world in J.R. Blackmore."

The son of the iconic RAINBOW founder/guitarist Ritchie Blackmore, Jürgen Blackmore is a critically acclaimed guitarist in his own right and agreed to join this endeavor after realizing how intense the demand was for a RAINBOW "reunion." OVER THE RAINBOW marks the first time that four members from three different eras of RAINBOW will take the stage together along with J.R. Blackmore.

RAINBOW has spawned over 20 albums (five gold, four silver),seven Billboard Hot 100 and Mainstream Rock tracks, six Top 75 UK songs and at least seven MTV frequently played videos. Their longest tenure was from its inception through 1984 when it went on hiatus so Blackmore could reform DEEP PURPLE. A decade later, RAINBOW toured and recorded an album. Since then, Ritchie Blackmore has turned his focus toward BLACKMORE’S NIGHT.

Since 1998, former members of RAINBOW and their respective management offices have been bombarded with requests for RAINBOW to reunite. Carey, Rondinelli, Smith and Turner answered "the call" but agreed that the only legitimate way that this could be accomplished was with a Blackmore on guitar. Enter: J.R. Blackmore.

How does the younger Blackmore feel about sharing the stage with musicians he grew up watching perform in concert with his legendary father? "I have not worked with them," says Blackmore, "But I have admired them since I was young. That makes them like brothers."

Greg Smith agrees that the market for RAINBOW's brand of rock is under served. "I know there is a big demand for this music," he says. "The fact that all members are ex-RAINBOW from different periods in the band's history will give the music the integrity it deserves. A Blackmore on guitar will give it even more authenticity."

While Joe Lynn Turner has fond memories of collaborating with and great respect for Ritchie Blackmore, he's looking forward to working with his son. He states, "J.R. is the only logical choice for the guitar slot for OVER THE RAINBOW. I have followed some of his projects over the years now. He's very talented."

OVER THE RAINBOW will begin touring in Russia during February of 2009. 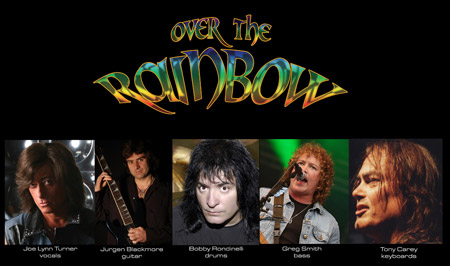