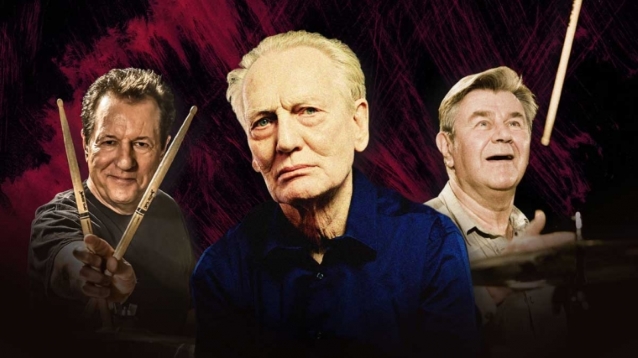 There have been various renowned drummers over the years but few more evocative, charismatic and diverse in style than these three absolute legends — Ginger Baker, Pete York and Herman Rarebell.

Tub thumpers extraordinaire, each doing different (and seemingly impossible) things with every limb, these are the men who have forged rhythms with the best of them. Together they provide an unsurpassed rock heritage spanning CREAM, THE SPENCER DAVIS GROUP and the SCORPIONS.

On April 12 the three rock giants will take center stage at the Brighton Dome in Brighton, England, bringing their unique, genre-crossing, playing styles to show just what it takes to be top of the game.

They will delve into their stellar careers to showcase their massive hits, including "White Room", "Gimme Some Lovin'", "Rock You Like A Hurricane", "Passion Rules The Game" and "Sunshine Of Your Love".

Backed by a coterie of top musicians, including Bernie Marsden (WHITESNAKE),Abbas Dodoo and Alec Dankworth, all three main men will play together at the end of the night to demonstrate just how much fun can be had on a drum kit.

Ginger Baker: The infamous hell-raiser and much lauded drummer who came to international fame with CREAM, BLIND FAITH and FELA KUTI has spent the last few years playing jazz, the music he first came to love. For "Drum Legends", he'll put the CREAM repertoire center stage.

Pete York: Pete is best known for his work in THE SPENCER DAVIS GROUP who released several top hits of the 1960s, including "Keep On Running", which reached No 1 in 1965. This was followed by "Somebody Help Me", "When I Come Home", "Gimme Some Lovin'" and "I'm A Man". Pete went on to perform with ERIC CLAPTON'S POWERHOUSE, BLUES CIRCUS and many other groups and projects over the decades. He also hosted and produced the TV series "Super Drumming" about drummers and music.

Herman "Ze German" Rarebell: Herman joined heavy metal giants the SCORPIONS in 1977 and went on to write many of their most popular hits, including "Another Piece Of Meat", "Rock You Like A Hurricane", "Blackout" and "Arizona". He's active with bandmates like Michael Schenker and also with his own band. He is one of the most important names in the rise of hard rock.

Rarebell told the Digital Journal about the "Drum Legends" event: "The show will start with a great drum 'battle' where the three of us play with and 'against' each other. After that, I will continue and play some of the SCORPIONS songs that I wrote or co-wrote, such as 'Rock You Like A Hurricane' and 'Another Piece Of Meat' and 'Blackout', just to name a few."

Rarebell continued: "Ginger Baker and Pete York will also come out and play some of the classic rock hits from their past such as 'Sunshine Of Your Love' and 'White Room' and Pete will, of course, play 'Keep On Running' and 'Gimme Some Lovin''. The show will also feature a drum solo from each drummer and in the end a fabulous finale with all the musicians involved."

Herman said that his plans for 2019 included taking "Drum Legends" to other places and making it "successful everywhere - to introduce 'Drum Legends' live to as many people as possible."