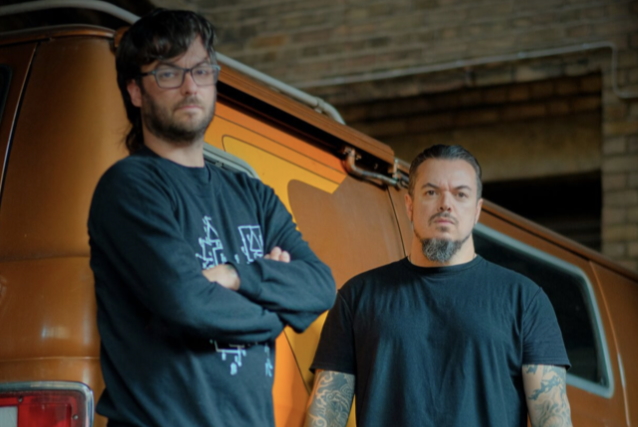 Ex-SEPULTURA Drummer IGOR CAVALERA On PETBRICK: 'It's Really Cool Doing A Project With Such An Open Mind'

On PETBRICK still being an unknown commodity:

Igor: "It's a new project for starters. It's something that we both have been kind of trying out certain things, and I think that's part of the beauty of it. It's trying certain things that work and things that don't work. It's really cool, the idea of doing a project with such an open mind is that we can always change things. There's no compromise on form, like musically. The way we look at it is whatever we feel like. It's always been from day one — it was like we showed up in the studio. We threw ideas at each other, then those ideas become songs and then later, they became a live project, then it became a record. It's step by step."

Wayne: "I think there's something really interesting about with just starting from the underground and building a solid fanbase and people that are genuinely interested in the music rather than trying to shoot for something bigger. It's the most gratifying way of doing something like this is to really build something small and get it really kind of solid. Those people are the ones that are going to be the most honest in the underground. They'll tell you if it's good and they'll tell you if it's bad. That's a really good way. We kind of learn how to do this project. It's, like, 'Oh, shit. We're doing a gig. How?' Over the last year and a half of doing gigs, the shows have changed and we've learned and listened to what people have said. It's a really good way of — you forget, when you've been in other projects, how much you can improve by just doing something and listening to 'Oh yeah I like it!' Definitely Rocket [Recordings], who released our record, has been 'Great.' Feeding back to what they think. We listen sometimes, sometimes we don't listen. It's good to have that relationship. That exists in the underground far more than it does at a bigger level."

On whether PETBRICK is a project that affords the two of them the ability to be free of any musical constraints from their previous bands:

Igor: "I think also you can say the opposite. I think there are all those elements in there. I guess it's both. I think it's both. The freedom you mentioned, it's really important, but the fact that again, it's a no-rule [project], and that's also something that I find exciting about this. It's not that we lay certain rules that we're not supposed to do with PETBRICK, then sometimes naturally something that Wayne has from his past, it comes through, or from my past, it comes through. It's not us forcing certain situations. It is just part of us, and I think that's how it should be."

Wayne: "I think the elements of the music have always been in both of us, but just the combination of the two of us create this new thing. I guess we didn't plan, 'Oh, we really like the sound of this. Let's try and sound like this.' You're just like, 'Oh, hey, man. Let's hang out. Let's write some music.' This came out. We've got a sound, I guess. People are always looking these days more and more and more to try and understand through genres and subgenres. I guess it's kind of unusual to find yourself down something with someone [with people] who doesn't really understand where that's coming from or what that sounds like, but that's great. But we weren't, like, 'Let's create something original!' That wasn't the thought process."

Igor: "It's funny because the other day I walked into a shop in London and I was, like, 'I'm going to see if they have our record here.' I didn't know where I should look. [Laughs] I was walking around, I was, like, 'Where is this record going to be located?' That was a funny one. I remember the first time I saw the record in stores, there were in new releases. That was easy to find, but now I'm, like, 'It's buried somewhere between. I don't think they have a 'weird music' section here.' It was a tough one."

PETBRICK's debut album, "I", was released in October via Closed Casket Activities in the U.S.