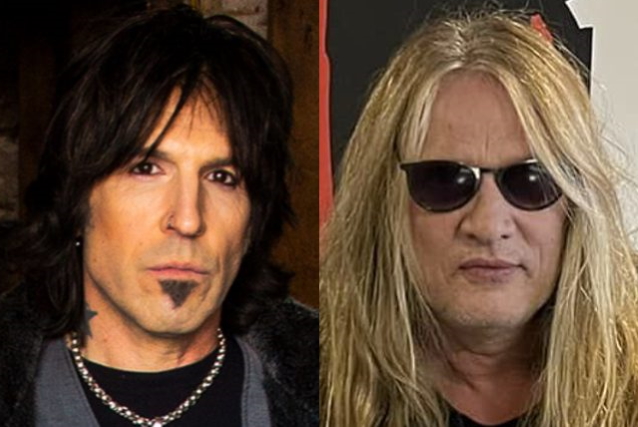 Former SKID ROW drummer Phil Varone has once again responded to ex-SKID ROW singer Sebastian Bach's claim that Varone's decision to pose nude for an Playgirl is "further proof that the name 'SKID ROW' has completely lost all credibility, cool, accuracy and is now devoid of all meaning in every way."

Varone, who was one of eight patients featured on the "Celebrity Rehab" spin-off series "Sex Rehab With Dr. Drew", was featured on the cover of Playgirl more than a decade ago. The publication, which included a 16-page spread on Varone, hit newsstands in December 2010.

A short time after Varone's appearance in Playgirl was announced, Bach took to his Twitter to write: "[This is] further proof that the name 'SKID ROW' has completely lost all credibility, cool, accuracy and is now devoid of all meaning in every way."

Varone reflected on Bach's comments in a brand new interview with Sofa King Cool. He said (as transcribed by BLABBERMOUTH.NET): "Baz is very ironic. I've known him for… I knew those guys 10 years before I joined the band. I mean, they were friends of mine. Before I joined the band, I knew Sebastian. And I never really understood why he said anything. This is a guy who wore a shirt that said 'AIDS Kills F**s Dead'. This is a guy that threw a bottle into a crowd and almost killed a girl. And the band had to pay hundreds of thousands of dollars to keep his ass out of jail and pay all these things in medical. And he's talking about me on Playgirl?

"He's in a war with himself, 'cause I've got nothing to say," Phil continued. "The guy was a tremendous rock star — legendary — and he's always gonna be that way. And I just don't understand at what point the people go the extra mile to say anything when it's, like, 'Dude, you already have the gig. Just shut up. People like you already. Don't ruin it.' 'Cause people like him, he can just talk himself into a hole.

"What does me doing Playgirl have anything to do with SKID ROW or hurting SKID ROW? Not to mention that one of his favorite bands, TYPE O NEGATIVE, Pete Steele did it. Bret Michaels did it. Brad Pitt did it. I mean, so many people have done Playgirl. It was a bucket list thing for me. I mean, granted, yeah, my dick is bigger than his, so don't be mad at me about that. Scream at whoever you believe the maker is.

Varone joined SKID ROW in 2000 — about four years after Bach parted ways with the group.

Back in February 2010, Varone filed a lawsuit against SKID ROW guitarist Dave "Snake" Sabo and bassist Rachel Bolan, accusing his former bandmates of "spreading lies" and destroying his reputation. He claimed Sabo and Bolan "embarked on a crusade to spread vicious lies about Varone in an effort to destroy his professional and personal reputation" and "to prevent him from truthfully describing his career history as the drummer for SKID ROW, by contending that his use of the band name is trademark infringement." In addition, he claimed the pair "had falsely informed people that Varone had slept with Sabo's wife, that Varone is a cocaine addict and that Varone is a liar," adding, "Its (SKID ROW's) complete omission from a description of Varone's professional experience deprives Varone from the benefits of his experience as a professional studio and live musician and rock star who toured the world, gave countless interviews, made hundreds of appearances and amassed thousands of fans worldwide." According to the complaint, Sabo, Bolan and their lawyer contacted night clubs and both Oprah Winfrey's and Tyra Banks' talk shows in advance of his appearance in connection with "Sex Rehab" and successfully prevented Varone from being identified as a former drummer of SKID ROW.

In 2014, Varone slammed his former bandmates in SKID ROW as "clueless, jealous dummies" whose recent "piece-of-shit records" are best used as "a set of drink coasters."

During an interview on "The Classic Metal Show", Sabo was asked about "Waking Up Dead", the 2007 documentary from Varone which followed Phil through four years of drug abuse and wall-to-wall sex with groupies while drumming for the band. "I thought it was gross, man, to be quite honest with you," Sabo said. "See, that's just a lifestyle I never cared for or partook in. I never did drugs. The worst thing I ever did was drink too much vodka and puke, and that's basically the extent of my shit. So to live that and to see that, I thought it was pretty gross and disgusting, to be honest with you. I don't have any empathy for that situation at all, because you have choices. You make choices in life, and that was the choice that he made. And I don't wanna be a part of that or a party to it. So, I guess the only thing I can say is that I thought it was pretty gross."

In a 2006 interview with Metalshrine, Bolan stated about "Waking Up Dead": "I haven't [seen it] and I don't support it at all… That's [Phil's] world. I don't do drugs and the guys in the band don't do drugs. I don't endorse it. That's his world and he wanted to put our image in it and being the fact that the guy was only in the band for two years.... The fact that he thinks he has the right to go out and use the SKID ROW name is preposterous. Yeah, that's his world, not ours."