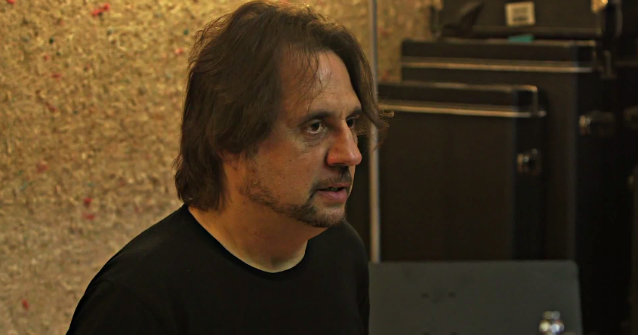 Professionally filmed video footage of former SLAYER and current PHILM drummer Dave Lombardo performing a drum solo at his studio in Los Angeles, California on November 23, 2013 can be seen below. The clip was filmed by Rick Kosick, Benji Lanpher and edited by Rick Kosick.

During a recent appearance on "The Steve Austin Show - Unleashed!" podcast, SLAYER guitarist Kerry King stated about the band's latest split with Lombardo: "When Dave was in [the band] this last time, I figured I'd be on the stage with him until one of us fell off the stage, dead. Things change. He got some bad advice and listened to some bad advice, gave us an ultimatum ten days before we went to Australia [to do the Soundwave festival tour]. And I said, 'I can't have this over my head.' And I feel bad for Dave to this day; I really feel bad for him because he shot himself in the foot. Maybe he thought he had the upper hand, but you ain't gonna get me…. Before I got home, I knew exactly what I was going to do for Australia."

Lombardo will perform with John Zorn and Bill Laswell as part of the BLADERUNNER trio, featuring in Zorn's concert, Triple Bill.