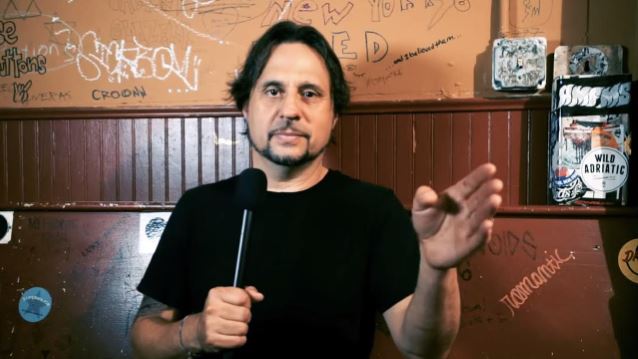 Former SLAYER drummer Dave Lombardo recently spoke to Louder Noise about his current band, PHILM. He said (see video below): "The two albums that PHILM recorded are definitely different — very different, actually. The first one is a little more loose and it has three or four different improvisations within all the other songs; they're little special improvisations that we were able to capture. And the second one, yes, it was a little more tailored towards the heavier side of music. Actually, there's another album that we plan on releasing soon. It's called 'Philm Noir', and that's piano, bass and drums. Gerry [Paul Nestler, guitar/vocals] plays piano really, really, really well, and Pancho [Francisco Tomaselli], obviously, on bass and myself. I tone it down and play with brushes. So, I would say 'Fire From The Evening Sun' is the extreme side of PHILM, but then we also have a very avant-garde, jazz and ambient side of PHILM, which is 'Philm Noir'. So, between those two, 'Harmonic', the first album, is somewhere there in the middle. There is a variety."

Regarding the PHILM songwriting process, Lombardo said: "This band records very different and writes music very different, unlike any other band I've been in. These guys in PHILM, we improvise our rehearsals. We'll just go to rehearsal and we'll just start improvising, but we'll record the band. And then, at the end of the day, of a jam session, we'll pick out some of the gems — what I call little gems — of those jam sessions, and we'll create songs of those pieces. Because we have so much music in us that we tend to improvise in a lot of different modes, in different ways, and sometimes we're able to create something very unique. And all our songs are, basically, written from jam sessions or improvisations, and we captured something magical, and then we created around that."

Lombardo told All My Own Reviews earlier in the year about "Philm Noir": "We recorded in New York City when we where there. It's, like, a double album. There is, like, 19 songs. It's called 'Philm Noir', which is 'Philm Black' — taken from the 1940s and '50s films that were shot in very particular light. It's really, really cool. So we titled it that, and there are 19 pieces they are all improvised. We just went into the studio pressed record and created bodies of music around titles that Gerry thought of."