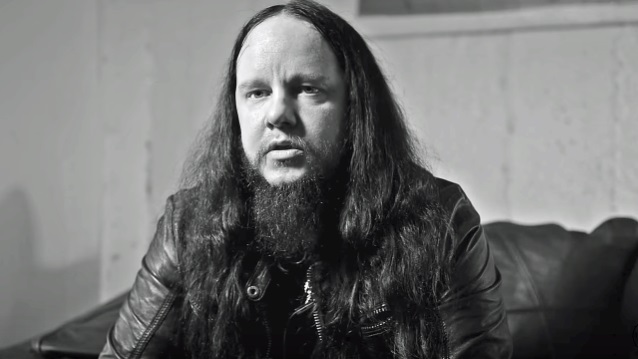 Ex-SLIPKNOT Drummer JOEY JORDISON On Overcoming Recent Health Issues: 'There's No Way I'm Not Going Back Out On Tour'

Drumtalk, the video podcast by German drummer and videographer Philipp Koch, conducted an interview with former SLIPKNOT and current VIMIC/SINSAENUM and drummer Joey Jordison. You can watch the entire chat below. A few excerpts follow (transcribed by BLABBERMOUTH.NET).

Joey: "The simplest beats, on what rock music or any music has been formed on, can be the toughest beats to execute and perform, because it's really easy to not respect a simple 4/4 beat because people always want to play fast. Sometimes, a lot of drummers will try and rush into the technicality of, if it isn't fast, or I'm not faster than that guy, then I'm not a good drummer. My advice always is to start very simple and master your timing and master the most simple beats that you can and you just keep elevating from that. Trying to go right into playing fast is not necessarily the best way to go about it, because if you don't have your foundation locked in, it's hard to progress. It's very hard to go back. I know a lot of drummers that just went into speed and they have a very hard time locking into a really simple groove. It's really weird, so I'd say start from the ground up at the basics and move forward from there. That's the way I did it. It worked for me."

On the current state of his health after overcoming the neurological condition acute transverse myelitis, an inflammation of the spinal cord which damages nerve fibers, which ultimately led to Jordison losing the use of his legs:

On the "eye-opening" experiences he's had throughout his career:

Joey: "There's been a ton, it depends on 'eye-opening' to what. What's cool about making music is when you create a record, it comes from somewhere. When you're connecting with people you see eye to eye with and they're feeling the same thing you're feeling, or they're feeling the same thing you are, you can climb tons of musical mountains, man. The fact is, the best reward is when you get out there and you throw it out to a bunch of people, they catch onto it and they throw it back and they've been listening to it for a long time, and they come, especially all the way over here [Europe] and [you] get a crowd reaction sent back to you, through songs you wrote in your basement. That just shows you the power of music and how it can move people and move nations, even if it could. It's a real powerful thing."

On his relationship to his audience:

Joey: "There's always a connection. Like, take the barricade. If you're talking about festivals and stuff like that, we just got back from South America with MEGADETH and we were dealing with the same kind of thing. Those kids and fans, they were so insane. Man, it just felt they were literally on the stage with you. The barricade didn't matter; all the security didn't matter. It was absolutely stunning, those shows. The same things happen all over Europe. When we go to Japan, when we go to Australia, Canada, United States, everywhere we've played, all the fans, they react a little bit different, but it doesn't matter because they have their own culture. That's the best thing about touring. You get to go to all these beautiful places and meet so many different types of people and seeing how their culture reacts to your music and just music in general, it's a real special thing."

Jordison was recently tapped as guest drummer for MINISTRY's North American tour. The tour kicks off March 22 at the House Of Blues in Anaheim, California.

VIMIC's debut album, "Open Your Omen", is expected to arrive at some point in 2018 and signals the biggest triumph of Jordison's illustrious career to date, coming into existence as he faced his life's most difficult challenge. The album was produced by Jordison and Kato Khandwala (MY CHEMICAL ROMANCE, THE PRETTY RECKLESS),with mixing and mastering assistance from MEGADETH's Dave Mustaine, who guests on the album's first single, "Fail Me (My Temple)".