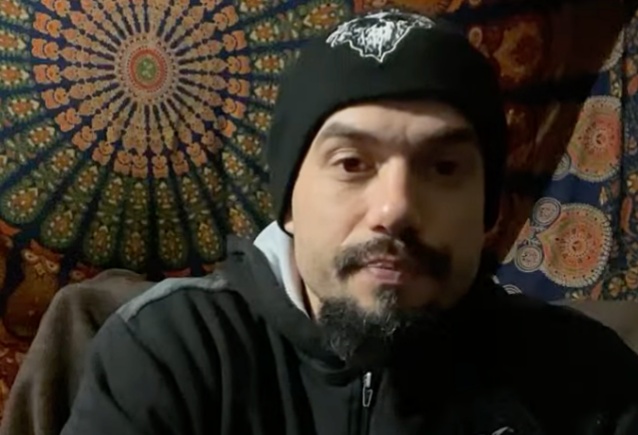 During a January 21 question-and-answer session on his YouTube channel, former SOULFLY guitarist Marc Rizzo reflected on his participation in a tour where former SEPULTURA members Max Cavalera and Igor Cavalera performed select tracks from the band's seminal "Beneath The Remains" and "Arise" albums. He said (as transcribed by BLABBERMOUTH.NET): "I worked very, very hard to get prepared for that tour. That was not easy to learn those old-school SEPULTURA songs. A lot of 'em I knew, but I really wanted to show a lot of respect to Andreas [Kisser, SEPULTURA guitarist]. I did not want his guitar solos or his riffing to be different than what it was on the record. People paid good money to see 'Beneath' and 'Arise'. Speaking for myself, I wanted to play just like the record. I wanted to put on a great performance and pay homage to Andreas. That was really what excited me. Andreas has always been one of my favorite lead guitar players and I really wanted to pay homage, show my respect to what a great guitar player Andreas is. So when it was time to learn all those solos, I learned 'em by ear. It took me about two or three weeks to really try to learn those solos as close as I could get 'em, 'cause there's really not a lot of tab out there. And I did it, I think. I was very excited."

He continued: "That was one of my favorite tours I ever did because that's my favorite era of SEPULTURA… That was really, really an important tour for me because that's my favorite era of SEPULTURA, was 'Beneath The Remains' and 'Arise', specifically because I think that's Andreas at his best in the early SEPULTURA years. Although I do think he's gotten better — that new SEPULTURA record ['Quadra'] I think is amazing. I think it's just as good as anything they put out back in the day. And I think it showcases how great Andreas has gotten better; he keeps getting better."

Asked by one fan if he has talked to Andreas since leaving SOULFLY, Marc said: "No. We are friends. I have run into him from time to time. He's always been very cool with me, every time I've talked to Andreas. And obviously I've always been very excited to talk to him also. We do have mutual friends in Brazil. I know I've relayed messages to our mutual friends. And I hope maybe one day I can do something with Andreas because, again, hes' one of my favorite parts of what was SEPULTURA and was a very big influence on me. Andreas was just as important to me as Dimebag [PANTERA] or Kirk Hammett [METALLICA] or any of the thrash metal shredders. He was very important to me and I was very influenced by him."

When another fan mentioned that some of the musicians involved with the aforementioned "Beneath The Remains" / "Arise" tour looked "exhausted" while performing the material, Marc said: "That's what a lot of people were saying that whole tour — people looked exhausted on stage. Listen, you've gotta show up prepared, man. These tickets are not free — I always say that — and we were going to some countries that people don't make a lot of money, like in Russia, I'm assuming, in certain cities, and in certain cities down in South America. You've gotta come out and give a hundred percent, and a lot of people were saying what you just said — that some people looked exhausted on stage. I know I wasn't, man. I came out guns blazing, I was super excited to be there, and I worked very hard; I put about a month of rehearsal, every day, to prepare for that tour.

In August, SOULFLY parted ways with Rizzo due to personal differences. A permanent replacement guitarist has yet to be announced. FEAR FACTORY's Dino Cazares played guitar for SOULFLY on the band's last U.S. tour which took place in August and September.

Shortly after Rizzo's exit from SOULFLY, Max told Metal Kaoz that Marc has been spewing out "lies and bullshit" in some of his recent interviews regarding his departure from the group. "All these accusations — it hurts," he said. "It hurts to hear. After everything that we did for him, which was a lot — we put him on all the records and always took really good care of him, always really, really gave good treatment to him. To hear him backstabbing us like that, it's just not nice. He's obviously trying to get fans to be against me and make him the victim… It just sucks to hear all that. It definitely hurts me when I hear all these accusations that I know are lies and bullshit; it's all fabricated by his crazy mind. I don't know. It's a strange situation."