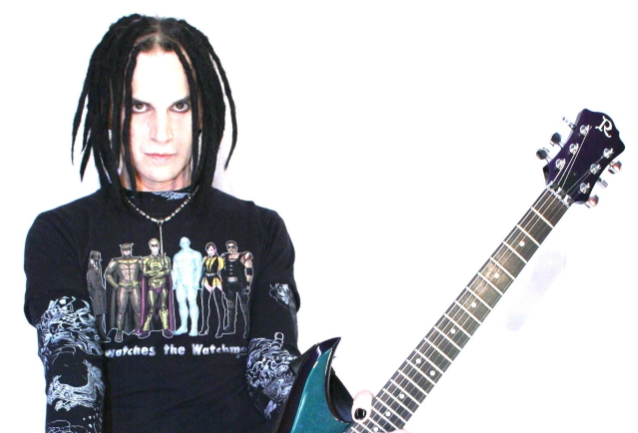 Ex-STATIC-X guitarist Tripp Eisen has accused his former bandmates of taking undeserved songwriting credit on some of the tracks on the group's just-released "Project Regeneration Vol. 1" album.

During the recording sessions for "Project Regeneration", STATIC-X claimed in a press release that one of its producers uncovered several additional unreleased and unfinished tracks, many of which contained isolated vocal performances by Wayne Static. Because of this supposed find, the new STATIC-X album now features lead vocals by Wayne on virtually every song.

On Monday (July 13),Eisen — whose real name is Tod Rex Salvador — released a statement disputing STATIC-X's explanation for where some of the previously unreleased tracks came from and claiming that the original versions of all of the older songs on "Project Regeneration Vol. 1" are "completely Wayne Static and Tripp Eisen material; none of the current members had anything to do with their creation."

"As STATIC-X thanks everyone for making the album 'Project Regeneration Vol. 1' successful, their former guitarist and co-songwriter Tripp Eisen responds with a genuine 'you're welcome.'

"Tripp's material has been used in the development of this incarnation of STATIC-X. This is evident in the lead song on the 'Project Regeneration Vol. 1' teaser: 'Bring You Down', also a featured song on Spotify. Tripp actually wrote a majority of the music and lyrics on this particular song. The exact same is true for the song 'Something Of My Own'.

"In October 2018, the song 'Road To Hell' was used in the teaser that launched the STATIC-X reunion. This was 100% Tripp's music with a partial lyric credit. This song was re-titled 'My Destruction' and is on the new album.

"The question of the true authorship of certain songs casts a shadow over this project, one which is supposed to honor the memory of Wayne Static, a man of integrity and vision, a man who called Tripp a brother and who collaborated with him on some of STATIC-X's memorable hits like 'The Only' and 'I'm The One'.

"If you listen to the new chorus to the first single 'Hollow' you will hear a part borrowed from the Eisen/Static collaboration 'I'm The One' — the signature hook 'yeah-yeah-yeah'!

"The original versions of all of the older songs on 'Project Regeneration Vol. 1' are completely Wayne Static and Tripp Eisen material; none of the current members had anything to do with their creation. The band obviously wants to gloss over this fact and the patently deceptive songwriting credits on the new album highlight this point. This is not taking anything away from the album as it is a great effort and a high quality-sounding album. We all love the memories of Ken, Koichi and Tony circa 1999-2000 and it is good to see them working together even without Wayne.

"History Of The Reunion:

"This project began in September 2016 because Tony Campos and Tripp reconnected and reestablished their friendship. Tripp traveled to California to pitch his idea of the STATIC-X reunion. He brought his friend Edsel Dope into the project as well. [Below] is a photo of that meeting in Burbank, CA at that time.

"This reunion was born around several good friendships and mutual respect. Tripp's past legal troubles were addressed early on and Tony Campos had Tripp's back, knowing the details of his case, the exaggerations in the press and judged his friend fairly and without prejudice. Edsel shared Tony's sentiments about Tripp and knew his good character. They continued to work together, and Tripp was part of the project up until April 2019 when he finally objected strongly to the changing of the material and took legal action.

"The real conflict is Tripp's objection to everyone trying to get their names and imprint on the songs and trying to get every dollar they can, which sort of takes away from Wayne's estate and family's financial interest! This is an uncomfortable fact but evident as you read the album credits. The band made many promises to Tripp as the project developed and he trusted his friends. Tripp was never after the profits, but mainly wanted proper credits, appreciation and to keep the project authentic! He will take credit for spearheading this reunion, take credit for much of the noted and unnoted songs on the album, and take credit for putting Edsel Dope (aka Xer0) in the band.

"Tripp also wants fans of Xer0 to know that the idea of Edsel wearing a mask was there from day one. At the first meeting it was agreed upon, that if he was to be the singer, he would be wearing a mask with an 'X' on it. The idea was spawned from the X-Man in the STATIC-X comic book from 2002.

"The release of STATIC-X: 'Project Regeneration' is the culmination of four years of planning and hard work. The band has benefited from this and did a great job bringing back Evil Disco and paying tribute to Wayne Static for fans worldwide.

"Tripp's new band FACE WITHOUT FEAR is continuing to honor the STATIC-X legacy in their own way and will be doing some cool versions of STATIC-X songs: Check out their livestream from last month where the band performs 'The Only'."

In June 2019, BLABBERMOUTH.NET published an interview Eisen gave to "Totally Driven Radio" in which he revealed that he was involved in the making of "Project Regeneration". The news of Eisen's association with the LP did not sit well with many of STATIC-X's fans who objected to the fact that a convicted sex offender was collaborating with the group on new music. (More than a decade ago, Eisen served time for meeting and sexually assaulting two underage females in January and February 2005.)

Asked by a fan on Instagram if it's true that "a known sex offender" was working with STATIC-X on the band's new album, the group responded: "Listen! Let me make this very clear. Wayne, Tony, Ken and Koichi are the ORIGINAL line up of the band and we are celebrating our 20th anniversary & memorializing our friend Wayne!!! The 3 of us and Wayne are the TOTAL focus of this album and this tour. That guy was in static x for a couple years prior to HIS OWN personal troubles. His issues have NOTHING TO DO WITH US!!! ... He was a co-writer on songs with Wayne & the band in the past. Some of those old songs ended up being tracks that Tony and the producers recovered some of Wayne's unreleased, isolated vocals on. Those isolated vocals have never been heard and they are very special and some of the final pieces of art that Wayne left behind. Clearly, the guy you mentioned is promoting his new band by mentioning his PAST involvement with Static-X and he is attempting to gain credibility through his PAST association. Tony, Koichi and ken entered the studio together, along with their touring vocalist 'xer0' and they have been working diligently to craft some amazing music underneath Wayne's unreleased vocal tracks. Tony, Koichi, Kenny, and xer0 are the only people participating In the recording of this new album. Aside from Wayne's vocals and a couple guest vocalists, NOBODY ELSE is involved in the recording and production of his album. Tony, Ken, Koichi and touring vocalist 'Xer0' are the only people that have been in the studio recording and working with the bands original producer Ulrich Wild on this incredibly special new album. End of story."

Tripp joined STATIC-X in 1999 and recorded three albums with the platinum-selling band.

Three years ago, Eisen told "Totally Driven Radio" that his arrest and prison sentence was "a difficult time of my life" and insisted that he has "learned from it" and "grown. What happened to me was really bad judgment, terrible mistakes that I made, and I paid a price for 'em," he said.

Below photo of Edsel Dope, Tripp Eisen and Tony Campos was purportedly taken on September 3, 2016 in Burbank, California. Also available is the actual BMI registration and splits of the above-mentioned three STATIC-X songs from 2005 and how they would've been credited on the album.

Claims. We all know why he was fired 15 years ago. Deplorable! no credibility. Desperate. Begging for attention. 😩😩😩 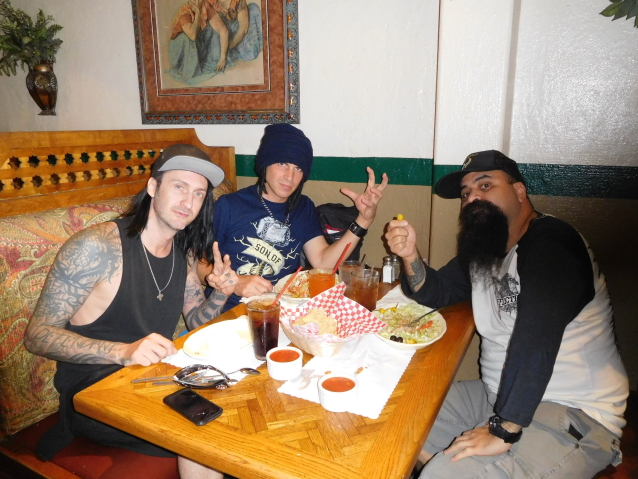 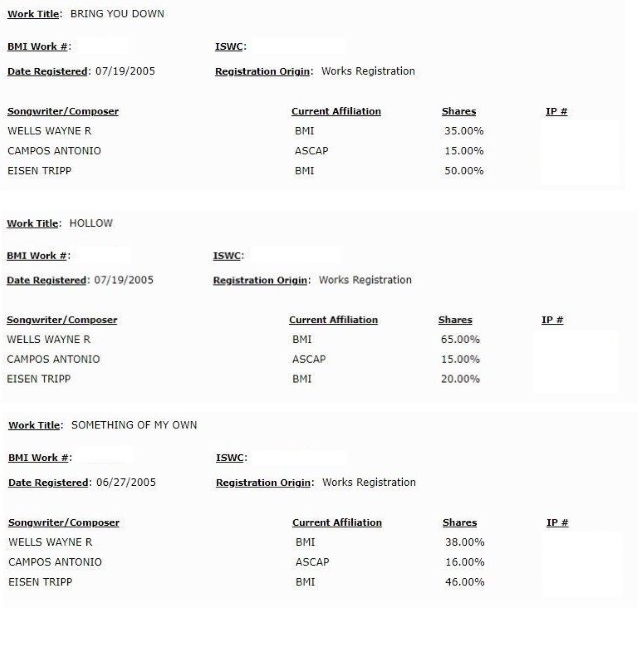