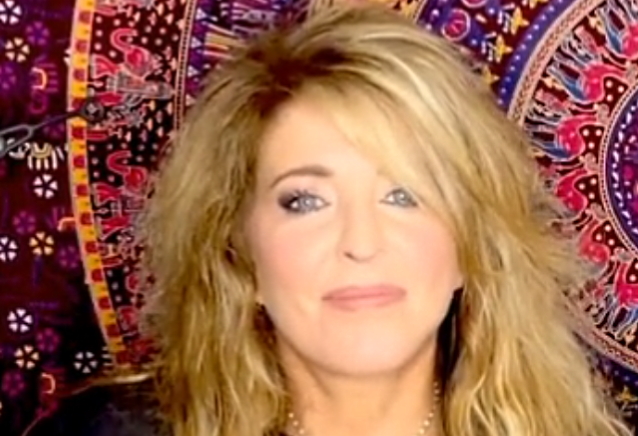 Former VIXEN frontwoman Janet Gardner has opened up about the surgery she underwent nearly four years ago to remove blood clots in her brain, a condition known as a subdural hematoma.

Subdural hematomas result from bleeding on the surface of the brain, and the condition is most often due to a serious fall or head injury. According to Healthline, the condition can be very serious, as blood filling up the space around the brain can put pressure on vital brain tissue. The severity of a subdural hematoma is related to how extreme and rapid the bleeding is.

On January 12, 2018 — the day after playing a successful show with her solo band at the Whisky A Go Go in West Holywood, California — Janet was rushed to the hospital where she had to have a hole drilled into her skull to relieve the hematoma and put a titanium plate to cover the hole.

Gardner discussed her experience during an appearance this past Thursday (October 28) on SiriusXM's "Trunk Nation With Eddie Trunk".

"I woke up and I had a crushing headache — absolutely," she recalled (as transcribed by BLABBERMOUTH.NET). "I'd never felt that before. My head was crushing. And then, all of a sudden, I couldn't feel my hands. Everything was just going wrong. My eyesight was going screwy. I knew something was seriously wrong. So I said to [my husband and bandmate] Justin, 'I think we need an ambulance.' And he was, like, 'Just lay down for a minute.' And I took some Advil or something, and I threw that up instantly. I was in the bathroom. And I knew something was wrong. So the ambulance came, and by then I couldn't even remember the ambulance trip to the hospital. And then they woke me up there and a bunch of different doctors were looking in my eyes and doing this and that — all different things. And finally the neurosurgeon that was on staff at Cedars-Sinai [Medical Center in Los Angeles] came in and said, 'Let's just take a CT scan,' and then immediately was, like, 'Well, we know what's wrong. You need surgery now.' And, of course, I said, 'What's the alternative, if I don't have surgery?' And he was, like, 'No. You will not survive. So you need to do this now.'"

Asked if the recovery was "rough," Janet said: "Yeah. It was not fun. It had squished my brain, so it took time for my brain to repopulate my head properly — and things like that. And, of course, I have plates and screws and things going on in there. But, all things considered, I was okay after about six weeks. [The first] two weeks were completely rough — I really couldn't do anything; I couldn't think right; I couldn't talk; I couldn't eat right; my muscles were not doing anything right. And then they did some therapies — different OT kind of physical therapy things with my hands and small motor things, and talking. And six weeks later, I was pretty much a hundred percent."

Janet left VIXEN in January 2019. At the time, she said in a statement that she wanted to step aside and let drummer Roxy Petrucci and bassist Share Ross "pursue their vision for the future of VIXEN."