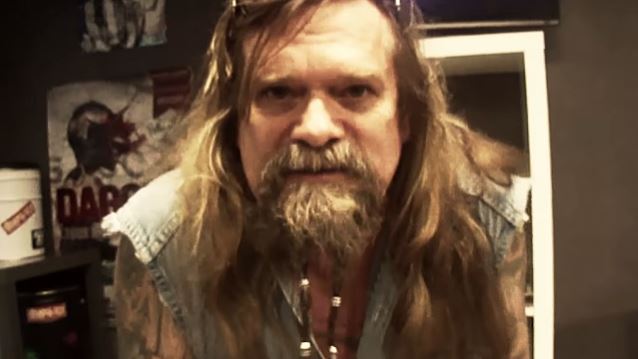 In a brand new interview with Noisey, former W.A.S.P. guitarist Chris Holmes was asked he was surprised by the attention he got with the video for his song "Let It Roar". "No," he responded. "I think it's just because people are talking trash about me. You know, once it gets on Blabbermouth, they start talking about how crappy it is. They're always gonna compare everything I do to W.A.S.P., no matter what. So they start bad-mouthing it. That's probably why it's gotten so viral. But you know, [the video] is just what I do in [my new hometown of] Cannes [France]. It’s a beautiful city. You see me fishing and stuff. I think one part of the video shows a wave hit the rocks and almost knock me off. [Laughs] It's a neat town. You can't do the same things in L.A."

Holmes also talked about his decision to move to France last year. He said: "My wife is from France. But since I left W.A.S.P. I dangled around in L.A., trying to find musicians to play with, but it just didn't work out. The change of culture in the last ten years… My kind of music isn't played that much — not like it was in the '80s."

He continued: "About two years ago, I pulled into a 7-11, and this kid got out of his car. He wasn't listening to rock. When I was his age, that's all I listened to. That made me realize the kind of music I do here anymore… [He was listening to] hip-hop. And I just don't play that kind of music."

Holmes added: "I was talking to one of my friend's kids — he's in high school — and I asked him, 'Why don't you listen to rock, like DEEP PURPLE or something?' And he said, 'Man, that's pussy music.' This is a white kid. So I thought, if people don't listen to this kind of music anymore, why should I even be here? I'm in my 50s, but I want to still keep on going, kind of. So I talked to my wife and we decided to move. They listen to rock more over here. There's lots more concerts and stuff."

Holmes last year released a solo album called "Nothing To Lose". Chris composed, performed, and produced the music and vocals, and teamed up with former MOTÖRHEAD drummer Phil "Philthy Animal" Taylor to perform on and engineer the effort.