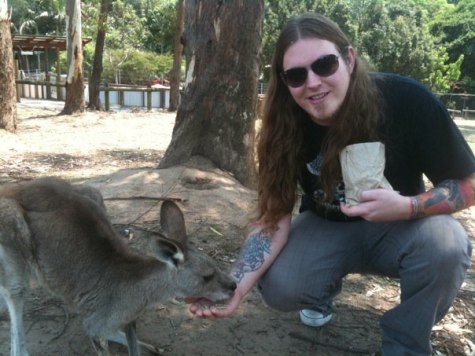 Ex-DEVILDRIVER bassist Jonathan Miller has given BLABBERMOUTH.NET permission to post the actual resignation letter he sent to his former bandmates announcing his departure from the group. It follows here in its entirety.

"Gentlemen, I am compelled to inform you all at this juncture in time of my resignation as the bass player of DEVILDRIVER.

"I love each and every one of you with all of my being and heart, but this is not the appropriate time for me to return to the band.

"I completely understand if the group needs to move on without me for good and am willing to accept that. More importantly, I would like to express my feelings to all of you concerning my departure from DEVILDRIVER.

"It has been apparent in my behavior in the past year that my own personal/private issues have come to the forefront of the band's focus; and that I have become an emotional drain on the rest of the band. This is unfair to all involved, band and crew alike. I feel that my continued presence in DEVILDRIVER at this time would not be healthy for the team. I also am aware that some of our relationships have become negatively affected during our course as a touring band.

"First and foremost, I would like to emphasize my love and gratitude to each and every one of you. All music/band-related issues aside, each of you holds a special place in my heart and I consider you all my brothers. The last thing I would want to witness would be the termination of any of our friendships. I will always be your true friend forever and I would be crushed to lose anyone of you as lifelong friends.

"I need time away from music, the touring lifestyle and want my spirit to grow and strengthen on my own.

"I have felt isolated from the pack for months now but am slowly beginning to feel as if I am coming into my own for the first time.

"My heartstrings are in a constant tug of war to quell this storm of emotions but I know in my gut that I need to take a step back from the band and evaluate my life at this point.

"I have shared the most memorable, untouchable, unbelievable, unmatched and unique experiences during our time as a fellowship of road dogs.... I thank you all for the beautiful memories and lifelong friendships.

"This is the hardest decision I have ever had to make.

"I will keep all of you in my heart forever as best friends.

In December 2010, Miller announced that "the drugs and alcohol" "finally caught up" with him after spending the bulk of the last decade on the road with DEVILDRIVER. He added that "the damage [was] catching up with [him] mentally and physically" and that he was going to enter "an intense rehabilitation program" in January "in order for [him] to reclaim [his] health and the person who [he] once was." He also stressed that he needed "to make a change so that [he could] save [his] own life and keep the friends that [he] still [had] left."

Filling in for Miller on the road with DEVILDRIVER for the past few months has been the band's tour manager, Bubble (a.k.a. Aaron Patrick),who has previously played with BURY YOUR DEAD.

In a February 2011 interview with Rock Radio's Tom Russell, DEVILDRIVER frontman Dez Fafara stated about Miller's health issues, "Jon's getting himself well at this point and we hope to have him join the fold, happy and healthy and back with us."

He continued, "Aaron Patrick has played around fifty to sixty shows with us. He's doing a great job, the fans have really taken to him and understand what's happening with Jon, and that Jon needs to get himself better, and you don't want your friends passing away on the road. So let's get him well, shall we?"

"Beast", the fifth album from DEVILDRIVER, sold a little over 11,000 copies in the United States in its first week of release to debut at position No. 42 on The Billboard 200 chart.